As a kid I loved to colour in, and would spend many hours doing so, always in competition with my big sis as to who could colour in neater, she usually won now that I think about it!

So who creates these magic books that train kids to perfect their control over their felts and coloured pencils? It seems there are many who do but have you ever tried to create a colouring in book type image for young children to colour in? It’s not as easy as it sounds believe it or not. I can see some of you now getting out a sketch pad and having a go! Even if just to prove me wrong! And that’s ok, because some of you will get it straight away while others will see instantly what I mean, it all depends on your particular drawing skills to be honest.

I came across this situation years ago when out somewhere and my kids were bored. All I had at the time were some colouring in pencils and a sketchbook so I thought why not create something they could colour in and set to creating some simple artworks based on things they liked at the time. Over the years I’ve recreated this for other kids in similar situations and of course I got the hang of it with time and experience.

So why was it not simple and easy, well there are some things you need to consider-

So there you go, I challenge you all to try your hand at this and send me your sketches, I’m really interested in seeing what you come up with, we may even be able to create a colouring in book for little kiwis that we can put on-line and people can print off to their hearts content. So let’s look at kiwiana and things that will appeal to our little corner of the world. I look forward to seeing some interesting concepts from anyone keen enough to give it a try and Ill publish the best ones with your name credited as the artist.

Update - adult or grownup colouring books became the rage in the early 2000s. while laid up with breast cancer and unable to paint I created my first grownup book - The Dress Book. Full of retro style gowns. its still available on Amazon and you can purchase it by clicking on the image below to visit Amazon 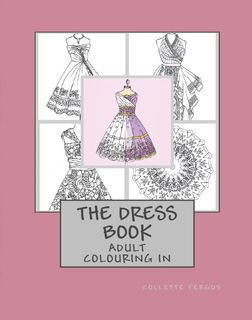 This lead to a series of dress books and it didnt end there, a series of Chardonnay Minx aka boozehag along with various other stand alone colouring books, A fan club was created by a group of American fans and my books became popular internationally. Have a look on Amazon for the whole rangee if you are keen to see what I created and maybe buy one or two as well.