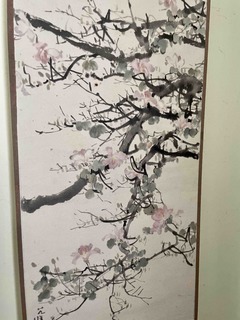 For centuries oriental painting has fascinated westerners for its unique qualities and style. The simplicity and controlled elegance are key features to this style of art. The earliest paintings were not representational but actually more ornamental; they consisted of intricate patterns and designs rather than the pictures we usually associate with this style. Painting in the traditional style is known today in Chinese as guó huà, meaning 'national' or 'native painting', as a point of difference to Western styles of art which became popular in China in the 20th century. There are mainly two techniques in Chinese painting, which are

Traditional painting involves essentially the same techniques as calligraphy and is done with a brush dipped in black or coloured ink; rather than oil or acrylic paints. As with calligraphy, the most popular materials on which paintings are made of are paper and silk, even the type of brushes used differ from western style ones, as in longer length brushes that flow easily and are not rigid in any way, A sign-writers brush is similar. There is a traditional method to loading the brush and direction of movement when painting is also very important. The finished work is then mounted on scrolls, which can be hung or rolled up. Traditional painting is also done in albums and on walls, lacquer-work, and other media.

Chinese or Oriental art as I prefer to call it (The association to HKHs is not mistaken in this case!) usually shows things like various types of flowers, blossoms and landscapes with high rocky mountains. Pine trees are an important part of the Chinese landscape too as they represent many virtues and principles. These are usually represented in a fan type formation rather than the actual different shapes that the trees really are which is an aesthetic thing. I have this piece on my wall that I absolutely love

A common look is to outline everything, a bit like the stained glass window look in western art, only more subtle in that the colours are softer and the paint or ink is applied in thin washes over the top. This takes a lot of skill and practice when using the traditional brushes and a light hand is needed to prevent heavy lines

So what about colour, well even this is an important aspect, relating to seasons, planets, animals and elements

Black – relates to water, the tortoise, and north for direction, winter time and the planet Mercury.

White – relates to the element of metal, tigers, the west, autumn and the planet Venus.

Red – relates to an obvious one in fire, the fire bird of phoenix, direction heads south, it favours summer and the red planet of Mars.

Yellow – relates to earth elements, a mystical animal as in the dragon, it stands for central in direction and the planet of Saturn. It doesn’t have a season since there are only four.

Green – relates to wood and favours the dragon as well, its direction is east, it likes spring for its season and Jupiter is its planet.

Chinese landscape painting is called ‘shan-shui hus’ which means the painting of mountain and water. It embodies the principle of Yin-Yang, the yang being the male element which relates to the mountains and the yin being female and water. Water is considered the weakest element in the universe but by its continuous soft pressure it penetrates and weakens the hardest of substances like rock hence the yin yang balance. Although not always a large feature in Chinese painting it is always there even if only implied as being present.

I found it interesting to learn that perspective in this style of art is rather different from western styles in that it doesn’t have a focal point. The illusion of perspective is created by making vast differences in to suggest distance rather than careful placement or using paler colours or making objects indistinct and therefore create distance.

These days the Modern style of Oriental painting sees Chinese artists starting to adopt Western techniques. In the early years of the People's Republic of China, artists were encouraged to employ socialist realism. Some Soviet Union socialist realism was imported without modification, and painters were assigned subjects and expected to mass-produce paintings. This regimen was considerably relaxed in 1953, and after the Hundred Flowers Campaign of 1956-57, traditional Chinese painting experienced a significant revival.

Following the Cultural Revolution when art schools were closed down; they re-opened the art schools and professional organisations were reinstated. Exchanges were set up with groups of foreign artists, and Chinese artists began to experiment with new subjects and techniques.

All in all I think it’s a beautiful style that stands out as something very different from western styles of art. I have brought a how to book on painting in this style and one day I’m going to give it a go.