The art of tattooing 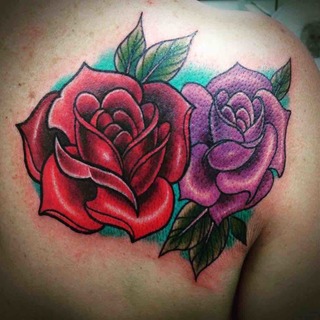 A tattoo is a marking made by inserting dark, indelible ink into the dermis layer of the skin to change the pigment mainly for decorative reasons. Tattooing has been practiced for centuries worldwide. The Ainu, the indigenous people of , traditionally wore facial tattoos. Today you can find facial tattooing on Maori of New Zealand, Berbers of Tamazgha in , Arabic people in East-Turkey and Atayal of Taiwan. Tattooing was widespread among Polynesian peoples and among certain tribal groups in the Taiwan, Philippines, Borneo, Mentawai Islands, Africa, North America, South America, Mesoamerica, Europe, Japan, Cambodia, Micronesia and of course New Zealand where it is considered to be the most tattooed country in the world. I myself have two tattoos, its all races and cultures that have them and very much a fashion statement amongst the younger generations.

Today, people choose to be tattooed for cosmetic, sentimental/memorial, religious, and magical reasons, and to symbolize their belonging to or identification with particular groups, including criminal gangs (see criminal tattoos) but also a particular ethnic group or law-abiding subculture. Some Maori still choose to wear intricate moko on their faces. In , , and , the yantra tattoo is used for protection against evil and to increase luck. In the certain tribal groups believe that tattoos have magical qualities, and help to protect their bearers. Most traditional tattooing in the is related to the bearer's accomplishments in life or rank in the tribe.

We can’t forget about people who have been forcibly tattooed either. A well known example is the identification system for inmates in Nazi concentration camps during the Holocaust. Tattoos have also been used for identification in other ways. For example, in the period of early contact between the Maori and Europeans, Maori chiefs sometimes drew their moko (facial tattoo) on documents in place of a signature. Tattoos are sometimes used by forensic pathologists to help them identify burned, putrefied, or mutilated bodies. Tattoo pigment is buried deep enough in the skin that even severe burns are not likely to destroy a tattoo.  For many centuries sailors have undergone tattooing for the purpose of enabling identification after drowning. In this way recovered bodies of such drowned persons could be connected with their family members or friends before burial. Therefore tattooists often worked in ports where potential customers were numerous. The traditional custom continues today in the Royal Navy () and in many others.

Tattoos are also placed on animals, though very rarely for decorative reasons. Pets, show animals, thoroughbred horses and livestock are sometimes tattooed with identification and other marks. Pet dogs and cats are often tattooed with a serial number (usually in the ear, or on the inner thigh) via which their owners can be identified. Also, animals are occasionally tattooed to prevent sunburn (on the nose, for example). Such tattoos are often performed by a veterinarian and in most cases the animals are anesthetized during the process. Branding is used for similar reasons and is often performed without anaesthesia, but is different from tattooing as no ink or dye is inserted during the process. My cat Pablo has a tattoo in his ear.

When used as a form of cosmetics, tattooing includes permanent makeup and hiding or neutralizing skin discolorations. Permanent makeup is the use of tattoos to enhance eyebrows, lips (liner and/or lipstick), eyes (liner), and even moles, usually with natural colours as the designs are intended to resemble makeup. Tattoos have experienced resurgence in popularity in many parts of the world, particularly in North and , , and . The growth in tattoo culture has seen an influx of new artists into the industry, many of whom have technical and fine arts training. Coupled with advancements in tattoo pigments and the ongoing refinement of the equipment used for tattooing, this has led to an improvement in the quality of tattoos being produced

Formal interest in the art of the tattoo has become prominent in the 1990s through the beginning of the 21st century. Contemporary art exhibitions and visual art institutions have featured tattoos as art through such means as displaying tattoo flash, examining the works of tattoo artists, or otherwise incorporating examples of body art into mainstream exhibits.

In the many prisoners and criminal gangs use distinctive tattoos to indicate facts about their criminal behaviour, prison sentences, and organisational affiliation. A tear tattoo, for example, can be symbolic of murder.

Tattoos are still associated with criminality. Although the general acceptance of tattoos is on the rise in Western society, they still carry a heavy stigma among certain social groups. The prevalence of women in the tattoo industry, along with larger numbers of women bearing tattoos, appears to be changing negative perceptions.

The most common method of tattooing in modern times is the electric tattoo machine, which inserts ink into the skin via a group of needles that are attached to an oscillating unit. The unit rapidly and repeatedly drives the needles in and out of the skin, usually 80 to 150 times a second. This modern procedure is ordinarily sanitary. The needles are single-use needles that come packaged individually. Hygiene is of utmost importance and sterile instruments and environment are vital. Gloves must be worn at all times and the wound must be wiped frequently. Prices for this service vary widely globally and locally, depending on the complexity of the tattoo, the skill and expertise of the artist, the costs of running a business, the economics of supply and demand, etc. The time it takes to get a tattoo is in proportion with its size and complexity. A small one of simple design might take fifteen minutes, whereas an elaborate sleeve tattoo or back piece requires multiple sessions of several hours each.

While tattoos are considered permanent, it is sometimes possible to remove them with laser treatments, fully or partially. Typically, black and darker coloured inks can be removed more completely. The expense and pain of removing tattoos will typically be greater than the expense and pain of applying them. Pre-laser tattoo removal methods include dermabrasion, kind of like sandpapering your skin or salabrasion, which is scrubbing the skin with salt. There is also cryosurgery and excision which is sometimes still used along with skin grafts for larger tattoos.

Temporary tattoos are popular with models and children as they involve no permanent alteration of the skin but produce a similar appearance that can last anywhere from a few days to several weeks. The most common style is a type of body sticker similar to a decal, which is typically transferred to the skin using water. Although the design is waterproof, it can be removed easily with oil-based creams.

Henna tattoos or Mehndi the vegetable dye designs done for Indian brides and religious festivals along with silver nitrate stains that appear when exposed to ultraviolet light can take up to two weeks to fade from the skin.