The Eye of Ra 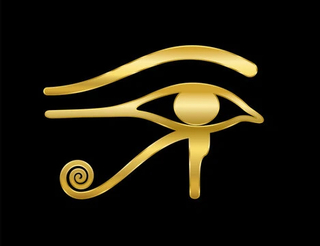 This symbol as shown was frequently used in jewellery and usually made from precious metals as well as lapis, wood, and porcelain with its idea being to ensure the safety and health of the person wearing it. It’s said to also attract wisdom and prosperity. Ra being the sun means this is also linked to the powerful destructive force of the fierce heat from the sun so it’s a double edged sword so to speak.

The ‘eye’ was created or sourced from the goddess called Wadjet and is associated with a number of other gods and goddesses of the Egyptian era.

This symbol has been popular as a tattoo although I think most who like it are attracted more to its aesthetics than what it stands for. I myself like symbolism in my art and use it occasionally in some of my work. Im attracted to both how it looks and also some of the mythology. Being a sun sign myself it naturally appeals to me anyway but as those of you who know me, eyes feature hugely in my work, in fact my infamous character ‘Boozehag’s’ eye was based on the eye of Ra initially.

There are many myths and legends on this popular image and you can read about some of them here http://www.ancientegyptonline.co.uk/eye.html