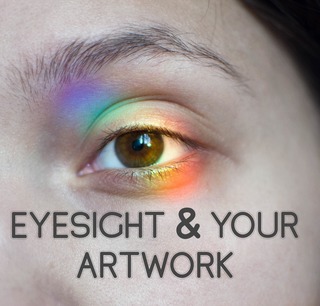 One thing I fear as an artist is loosing my eyesight. I woke up today with terribly bloodshot eyes caused from a makeup allergy and although it looks like I’ve spent too many hours awake, it looks much worse than it actually is! It has made me stop and think though, how much I need to look after this precious asset and my health in general.

One thing you don’t really notice until its too late is fading eyesight as you tend to compensate for loss and being so gradual its not an obvious change that makes you realise something is up.

I am fortunate enough to have 20/20 vision, I had my eyes tested just recently as I failed the test for my driving licence and was made to go have a proper examination. While waiting to see the optometrist Id picked out several funky frames I thought Id like to wear only to find that it was more likely the machine than me that had failed the test as there wasn’t anything wrong with my vision. The funky frames went back on the shelf since I didn’t actually need them!

So while on the subject I thought Id mention an interesting article I came across where they talk about Claude Monet and how his eyesight affected his art. Monet was known to have suffered from cataracts having been diagnosed with them in 1912 and not having surgery for them until 1923. New research showed just how much and for how long this could have had an effect and how it may have produced his distinctive style. The researchers recreated Monet's Water-Lily Pond as he would have seen it. This pond was the subject of a series of canvases which Monet exhibited in 1900 at the age of 60.
Using computer software to mimic the effect of cataracts, the picture was blurred and the colours varied, creating dark, muddy shades of yellow-green. The experts said the results showed how badly Monet's vision may have been affected before he had surgery. The theory was that he couldn’t really judge what he was seeing as even the colours were becoming muddier rather than just about the blurred vision. His paintings showed a use of very strong colours, and appeared to be out of character, so they felt that perhaps he had used these strong colours in the paintings because he was using them from memory or even because he may have been overcompensating for his yellowed vision by adding more blue."

Monet did have eye surgery in 1923, but it didn’t alter his style of painting that radically. As he had painted for 60 years before having these eye problems, he would have developed a vast amount of skill anyway so there will always be something of a mystery about what effect it did have on his art. Sadly he died only three years later in 1926 at the age of 86 from lung cancer.