Something about nothing II - lets talk about weird colours just because we can! 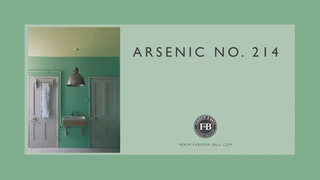 Arsenic is a colour believe it or not and there we were thinking it was just a poison, so today’s blog entry is about some of those colours that we wouldn’t normally have on our palette or we may have mixed by accident and never had any idea what they were called. Some you will know as soon as you read the name but others you will wonder what the hell that is. Ill do my best to describe the colour and leave the rest up to your imagination, so lets start-

Apricot, the 1980’s wall colour that was taken over by cream and then beige, which wasn’t for the faint hearted and it definitely not the colour of the fruit type apricot, as in its more a light yellow-orange colour that attempts to represent the colour of apricots. Actually, it is somewhat paler than actual apricots and more like the colour peach which it seems was invented in order to have at hand a pleasant pastel shade of orange to use in interior design. 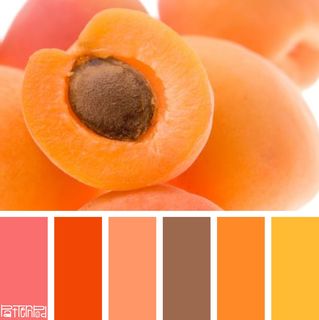 Arsenic now this is a cool colour literally in that its a dark bluish-gray colour representative of the element Arsenic. Arsenic it self is the chemical element that has the symbol As, and atomic number 33 with an atomic mass of 74.92. Arsenic is a notoriously poisonous metalloid with many allotropic forms, including a yellow (molecular non-metallic) and several black and grey forms (metalloids). Its compounds are used as pesticides, herbicides, insecticides and in various alloys. Owing to its use by the ruling class to murder one another and its potency and discreetness, arsenic has been called the Poison of Kings and the King of Poisons. I liken it to prison gray, an unpleasant colour just like its name and description.

There is even a paint shade you can buy called arsenic which is what we would expect, a deadly green shade, this is what it looks like, click on the image to go to the site if you want to buy some 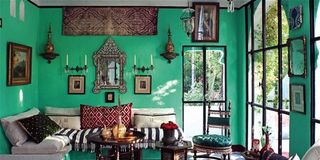 Arylide yellow, which is also known as Monoazo yellow is a pigment that is used primarily in artistic oil paints and watercolours. The pigment is considered to be a semi-transparent, bright, pale yellow. Chemically, its molecular structure is composed of carbon rings clustered together with nitrogen, and having chlorine atoms attached. The asymmetrical arrangement of these additional atoms creates variations in the overall colour like sulphur does. Paint manufacturers market arylide yellow by different names; the most common being Hansa yellow, which was created in Germany in 1909. Arylide is also used with other chemical compounds to create different pigments; for instance Maimeri, an Italian paint manufacturer, combines arylide yellow with yellow iron oxide and zinc oxide to create their version of Naples yellow light. 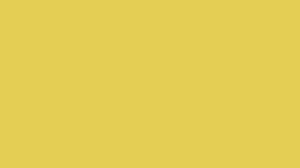 Bistre (Do you see a pattern here, weird names, boring colours? I do!) is both a shade of gray and a shade of brown made from soot, and looks kind of like black coffee.. Bistre's appearance is generally of a dark greyish brown, with a yellowish cast. Made from Beachwood, which is usually burnt to produce the soot, and is then boiled and diluted with water. Many of the "Old Masters" used bistre as the ink for their drawings or etchings. Instead of this, some used the strokes of a pen, some used India ink while others a black stone, etc. 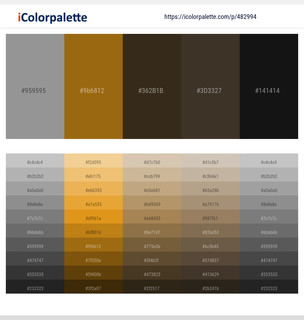 Buff  is an interesting name but not so interesting a colour unless you’re talking wedding invitation stationary! This is a pale yellow-brown colour that got its name from the colour of buff leather. I’d call it more a pale pale beige personally! Dont think I even need to show that one right?

Caput Mortuum is a Latin term whose literal meaning is dead head or worthless remains, and is used in alchemy and is also as the name of a pigment. Caput mortuum is also known as Cardinal purple, is the name given to a purple variety of haematite iron oxide pigment, and is used in some oil paints and paper dyes. It was a very popular colour for painting the robes of religious figures and important personages (e.g. art patrons). The name for this pigment may have come from the alchemical usage, since iron oxide (rust) is the useless residue of oxidization. It was originally a by-product of sulphuric acid manufacture during the 17th & 18th centuries, and was possibly an early form of the copperas process used for the manufacture of Venetian red and copperas red. Caput mortuum is also sometimes used as an alternative name for a colour called 'Mummy brown' which is a pigment that was originally made in the 16th and 17th centuries from ground-up mummies or so they say (How gross is that!), and whose use was discontinued in the 19th century when artists became aware of its ingredients.

Click on the imae below which the artist used this colour shade in to read more about this morbid colour! 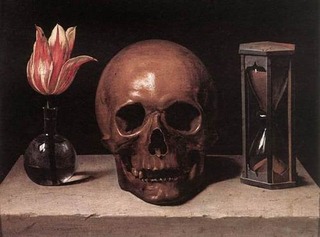 Chartreuse is a colour that is halfway between yellow and green and was named because of its resemblance to the green colour of one of the French liqueurs called green chartreue, which was introduced in 1764.  I’d call it more of a urine green yellow, get the picture!?

Drab, now how sad is that for a colour name?Fortunately its also known as Sand dune which is a colour which literally resembles the colour of a sand dune as in its composed of dark coloured sand. Still it has connotations of boring, dull and well….drab!

Ecru now this describes the shade that is greyish-pale yellow or a light greyish-yellowish brown. While researching this we thought gross festering things and nasty infections! It is often used to describe fabrics such as silk and linen in their unbleached state though. Ecru comes from the French word ecru, which means literally 'raw' or 'unbleached'. In the 1930s and before, ecru was considered to be the same colour as the colour beige suggesting we have completely different ideas of what beige is however since the 1950s ecru and beige have been regarded as two different colours. Click on the image to visit another site and read more on ecru 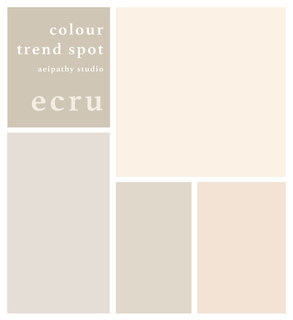 Verdigris is the common name for a green pigment obtained through the application of acetic acid to copper plates or from the natural patina formed when copper, brass or bronze is weathered and exposed to air or seawater over a period of time. It is usually a basic copper carbonate, but near the sea will be a basic copper chloride. The vivid green colour of copper acetate made this form of verdigris a much used pigment. Until the 19th century, verdigris was the most vibrant green pigment available and was frequently used in painting. Verdigris is lightfast in oil paint, as numerous examples of 15th century paintings show. However, its light fastness and air resistance is very low in other media. Copper resinate, made from verdigris, is not lightfast, even in oil paint. In the presence of light and air, green copper resonate becomes stable brown copper oxide. This degradation is to blame for the brown or bronze colour of grass or foliage in many old paintings, although not typically those of the "Flemish primitive" painters such as Jan van Eyck, who often used normal verdigris. In addition, verdigris is a fickle pigment requiring special preparation of paint, careful layered application and immediate sealing with varnish to avoid rapid discoloration (but not in the case of oil paint). Verdigris has the curious property in oil painting that it is initially bluish-green, but turns a rich foliage green over the course of about a month. This green is stable. Verdigris fell out of use by artists as more stable green pigments became available.
Let me know if you can come up with weird colours, I'd love to hear you're versions! 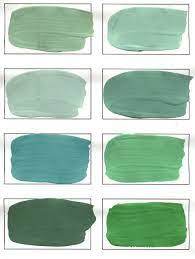 There are so many different unusual colours and its iteresting to see paint charts each year that have names for colours that get weirder and weirder. I know someone who used to work for a local paint company and he told me they get the staff to name each new range so hense the bizarre titles. Who would have thought?