What is Fulling and felting 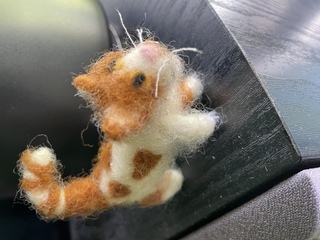 Recently I mentioned that I’d had a go at needle felting and that I’m keen to try actual felting as it looks lie an interesting craft and since I don’t have the ability or patience or let’s face it….interest in knitting, it means I can still create things out of wool, a material I am quite interested in. Funnily enough it’s quite fashionable to have items especially accessories made from felt so it means I can create some unique pieces that I can wear and not look like some crazy hippy chick, not that I mind that all too much, anything goes in my wardrobe anyway!

Click on image or link below to get your needlefelting supplies

The wool shop I visited suggested I start with a beginner’s kit so that I would have all the necessary tools and wool colours as well as a book explaining the process and a few ideas to get me started.  I was really keen on making miniature cats and the first thing I created was a mini ‘Pablo’ as in a rendition of my own cat. It actually turned out better than I thought; he’s easily recognisable as Pablo so that’s a good result I feel! Main image is the rather overloved by the real cat Pablo felted creature I made!

What exactly is felting, well let’s start with what is felt? Felt is a non-woven cloth that is produced by matting, condensing and pressing woollen fibres together. While some types of felt are very soft, some are tough enough to form construction materials, it all depends on how much work goes into the creation of it and of course the thickness and type of wool used.. Felt can be of any colour, and made into any shape or size.

Felt-making has been around for a very long time, and it is still practiced by nomadic people in Central Asia and northern parts of East Asia, where rugs, tents and clothing are regularly made from it. Some of these are traditional items, such as the classic yurt, while others are designed for the tourist market, such as decorated slippers. In the Western world, felt is widely used as a medium for expression in textile art as well as design, where it has significance as an ecological textile. It can be seen in a lot of clothing lines but more so in craft markets and specialised venues rather than general fashion.

Felt it self is made by a process called wet felting, where the natural wool fibre is stimulated by friction and lubricated by moisture (usually soapy water), and the fibres move at a 90 degree angle towards the friction source and then away again, in effect making little "tacking" stitches. Only 5% of the fibres are active at any one moment, but the process is continual, and so different 'sets' of fibres become activated and then deactivated in the continual process.

This "wet" process uses the inherent nature of wool and other animal hairs, because the hairs have scales on them which are directional. The hairs also have kinks in them, and this combination of scales (like the structure of a pine cone) is what reacts to the stimulation of friction and causes the phenomenon of felting.. It tends to work well with woollen fibres, as their scales, when aggravated, bond together to form a cloth.

Needle felting, the method I am attempting at present is a popular fibre arts craft conducted without the use of water. Special barbed felting needles that are used in industrial felting machines are used by the artist as a sculpting tool. Using a single needle or a small group of needles (2-5) in a hand-held tool, these needles are used to sculpt the wool fibre. The barbs catch the scales on the fibre and push them through the layers of wool, tangling them and binding them together, much like the wet felting process. Fine details can be achieved using this technique, and it is popular for 2D and 3D felted work like my cats.

Where does fulling come into the picture then? I’ve certainly done this myself once, where a knitted woollen garment was accidentally washed in a hot machine wash and shrank, this can be said to have felted but, more accurately, it had been ‘fulled’. Actual ‘felting’ differs from fulling in the sense that fulling is done to fabric as knitted already where felting is done to fibres that are not in fabric form. Modern fulling is an example of how the fibres bond together when combined with the movement of the washing machine, the heat of the water, and the addition of soap.

Then we have fulling which is the process of fluffing up an item thats already pre-knitted. You can tell fulling apart from felting, in that felting uses raw fleece and puts it through the same process without having any initial structure. Felting usually creates a fabric that's a lot stiffer than one that is made from fulling, since it needs more felting to be able to stick together at all. Fulling can be applied lightly, where you simply fluff up a fabric so it ends up softer, fuzzier and thicker which makes it warmer for the same soort of weight but it is still very pliable. Generally the best things to use for fulling are loosely knitted or woven fabrics, mainly because that allows more thread movement and makes the process much more efficient, and because the felt fabric you make is more likely to be lighter in weight.

Wool is not just a perfectly-renewable resource, quick-growing and if anything helpful to the sheep when it needs the load lightened! But it's also one whose source is inherently portable, and in a pinch is a handy alternate supply of food. So it's an ideal material for nomadic survival. Felt gives wool a very windproof quality when it's thick enough, and it is relatively water-resistant as well. It may be stiff, but it's almost never heavy. Tents made of it are just as liveable as more solid houses, they are light enough to be transported easily, and as a bonus they're fire-resistant and won't kill you in an earthquake. Clothes made of a lighter version act like portable tents, keeping the wearer protected from both extremes of temperatures and from precipitations, while remaining much lighter than the equivalent in other natural materials.

The cheaper types of felt like you get from craft shops are usually artificial.. Artificial felt, is made using the wet method, it has a minimum of 30% of wool fibres combined with other artificial fibres. This is the minimum required to hold a fabric together with the fibres alone. It would be difficult to achieve a stable fabric by hand at this ratio. All other wholly artificial felts are actually needle-felts.

There are many classes available to learn felting both the needle felting and the wet method.. Most craft s like Spotlight can usually put you in touch with people who teach these classes in your area. All in all it’s a fun way to make things and you can get some really fabulous and original items from making it yourself.

Tags: What is Fulling and felting