The Scream by Edvard Munch 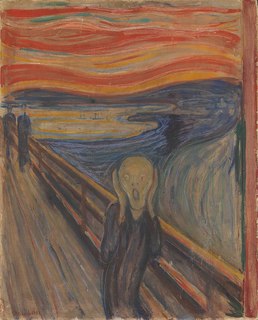 The Scream by Edvard Munch

Said to be one of Edvard Munch’s most important and famous paintings, it’s not widely known that there are actually four versions of this artwork by the general public.

The paintings feature an agonised figure who wails against a blood red skyline. It is a seminal expressionist painting by the Norwegian artist. It is said by some to symbolise modern man taken by an attack of existential angst. The landscape in the background is a place called Oslofjord, viewed from the hill of Ekeberg.  Its real title is ‘Skirk’ which is Norwegian and is usually translated as ‘scream’, correctly however it is more likely to be English for ‘shriek.’ Occasionally, the painting has also been called The Cry.

Of the four versions Munch created of the painting, the most famous are a tempera on cardboard version (measuring 83.5 x 66 cm) which was in the Munch Museum, and an oil, tempera, and pastel on cardboard (measuring 91 x 73.5 cm) which is in the National Gallery in Oslo. The third version is also owned by the , and the fourth is owned by a Petter Olsen. Munch later also translated the picture into a lithograph, so the image could be reproduced in reviews all over the world. One version is currently missing from the , having been stolen by art thieves in August 2004.

It has been suggested that the figure in the painting was inspired by a Peruvian mummy which Munch had seen at the 1889 Exposition Universelle in . This mummy, which was crouching in fetal position with its hands alongside its face, and had also struck the imagination of Munch's friend Paul Gauguin: it stood model for the central figure in his painting Human misery (Grape harvest at Arles) and for the old woman at the left in his painting Where Do We Come From? What Are We? Where Are We Going?. More recently, an Italian anthropologist speculated that Munch might have seen a mummy in 's which bears an even more striking resemblance to the painting. Kind of creepy but still rather interesting I thought!

On August 22, 2004 one of the Scream paintings was stolen from the Munch Museum, Oslo, at gunpoint along with Munch’s ‘Madonna,’ both paintings are still missing today and it is rumoured the thieves burnt the artwork to get rid of evidence.

On the National Gallery's Scream was also stolen. Initially the theft was linked to various anti-abortion groups active in , but this turned out to be false. After three months, the painting was offered back to the Norwegian government for a ransom of $1 million USD. The ransom was refused, but the painting was nevertheless recovered on 7 May, following a sting operation organised by the Norwegian police with assistance from the British Police and the .

When Munch translated The Scream into a lithograph in 1895 it was reproduced all over the world. The work's reproduction is on all kinds of items, from t-shirts to coffee mugs, and shows its iconic status in the eyes of todays public. In that respect, it is comparable to other iconic works of art, such as Leonardo da Vinci's Mona Lisa. The Scream is an emotionally very potent work, where attempts at simplifying and mass producing the image in popular culture can be interpreted as an attempt to defuse the feeling of unease it inevitably provokes in the viewer, though some would say that this interpretation is over-complication, and that the makers of merchandise are simply trying to make money off a well known image.

As one of very few works of modern art that are instantly recognisable even to people who know very little about art, The Scream has been used in advertising, in cartoons and on television. In one of her talk shows, the infamous Dame Edna Everage appeared in a Scream-patterned dress, and the character Ghostface, who is the psychotic murderer in Wes Craven's Scream horror movies, wears a Halloween mask inspired by the central figure in the painting.

I've even done my own version for a lockdown blog using artist mannequins for a giggle, the irony of the mannequins not having a mouth, here it is - 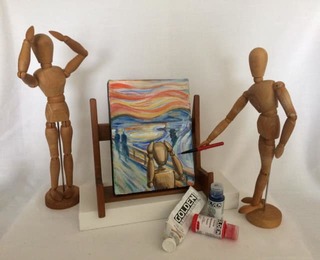 Tags: The Scream by Edvard Munch