The Art of Pottery 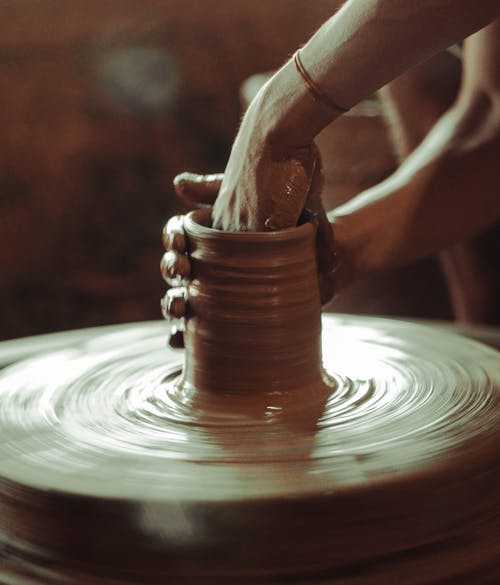 My favourite pottery is made by a local contemporary potter called Tammy Kuypers, her work is quite diverse and always unique in that it is so unusual you wont find anything else quite like it. Tammy’s work is art pottery as in sculpture and things like candelabra but always with a twist. The bright coloured glazes that Tammy uses are often hard to achieve I’m told but its one of the reasons I think her work stands out so much for me.

So what do we know about pottery? It is made by forming clay into objects of a required shape and heating them to high temperatures in a special oven called a that increases their strength, making them harden and setting their shape. There are wide regional variations in the properties of clays used by potters and this often helps to produce wares that are unique in character to a locality. It is common for clays and other minerals to be mixed to produce types of clay suited to specific purposes.

Methods of making Pottery include-

Hand building. This is the earliest forming method. Wares can be constructed by hand from coils of clay, from flat slabs of clay, from solid balls of clay — or some combination of these. Parts of hand-built vessels are often joined together with the aid of slurry or slip, an aqueous suspension of clay body and water. Hand building is slower and more gradual than wheel-throwing, but it offers the potter a high degree of control over the size and shape of wares. While it isn't difficult for an experienced potter to make identical pieces of hand-built pottery, the speed and repetitiveness of other techniques is more suitable for making precisely matched sets of wares such as table wares. Some studio potters find hand building more conducive to fully using the imagination to create one-of-a-kind works of art. The following picture is a piece of greenware leaf plate that I hand built, ready to glaze. 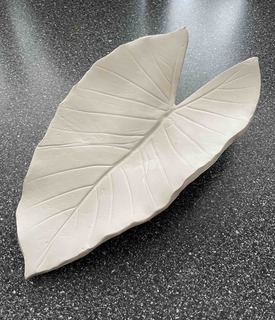 Potter's wheel. In the process that is called "throwing", a ball of clay is placed in the centre of a turntable which is called the wheel-head; the potters rotates this with a stick, or with foot power also known as a kick wheel or treadle wheel similar to an old fashioned sewing machine, some even have a variable speed electric motor. During the process of throwing the wheel rotates rapidly while the solid ball of soft clay is pressed, squeezed, and pulled gently upwards and outwards into a hollow shape. The first step of pressing the rough ball of clay downward and inward into perfect rotational symmetry, is called ‘centering’ the clay, and is the most important and often most difficult skill to master before the next step of  ‘opening’ which is where you make a centred hollow into the solid ball of clay,  then there is ‘flooring’  where you make the flat or rounded bottom inside the pot, ‘throwing or pulling’ is the part where you draw up and shape the walls to an even thickness, and then ‘trimming or turning’ is the removing of the excess clay to refine the shape or to create a ‘foot’. As seen in the main image.

Granulate pressing. As the name suggests, this is the operation of shaping pottery by pressing clay in a semi-dry and granulated condition in a mould. The clay is pressed into the mould by a porous die through which water is pumped at high pressure. The granulated clay is prepared by spray-drying to produce a fine and free flowing material having a moisture content of between about five and six per cent. Granulate pressing, also known as dust pressing, is widely used in the manufacture of ceramic tiles and, increasingly, of plates.

Roller-head machine. This machine is for shaping the pottery pieces on a rotating mould with a rotary shaping tool replacing the fixed profile. The rotary shaping tool has a shallow cone which has the same diameter as the item being formed and therefore is shaped to the desired form of the back of the article being made. Pottery can be shaped, using relatively unskilled labour, in that you can create multiple items in one go.

Slip-casting: is often used in the mass-production of ceramics and is ideally suited to the making of items that cannot be formed by other methods of shaping. A slip, made by mixing clay body with water, is poured into a highly absorbent plaster mould. Water from the slip is absorbed into the mould leaving a layer of clay body covering its internal surfaces and taking its internal shape. Excess slip is poured out of the mould, which is then split open and the moulded object removed. Slip-casting is widely used in the production of sanitary wares and is also used for making smaller articles, such as intricately-detailed figurines. The ceramics classes so popular in the 1980s and 1990s use this sort of pottery. I did a few courses myself and really enjoyed it. 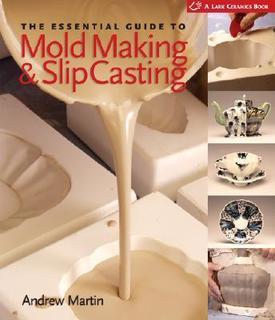 So what about decorating your pottery, they may be decorated in a number of ways, like in the creation stage you can carve patterns into its surface before firing, or as an  under-glaze decoration, the method they use for most blue and white wares. Then there is the obvious like in-glaze decoration or on-glaze decoration and last but not least enamelling.

Burnishing. This is where the surface of pottery items may be rubbed with a suitable instrument of wood, steel or stone, to produce a polished finish that survives firing. It is possible to produce very highly polished pottery when fine clays are used, or when the polishing is carried out on items that have been partially dried and contain very little water, although pottery in this condition is usually extremely fragile and you risk them breaking if you’re not careful.

Glazing is when a glassy coating is applied to pottery, the primary purposes are for decoration and protection. One important use of glaze is that it can be water proof or impermeable to water and other liquids so ideal for cooking items etc. Glaze may be applied by dusting it over the clay, spraying, dipping, trailing or brushing on a thin slurry composed of glaze minerals and water. Brushing tends not to give an even covering but can be effective as a decorative technique. The colour of a glaze before it has been fired may be significantly different than afterwards. These are removed and discarded after the firing. Special methods of glazing are sometimes carried out in the kiln. One example is salt-glazing, where common salt is introduced to the kiln to produce a glaze of mottled, orange peel texture. Materials other than salt are also used to glaze wares in the kiln, including sulphur. In wood-fired kilns fly-ash from the fuel can produce ash-glazing on the surface of wares, and the use of an ash and clay mix can result in alkaline glazes.

Pottery needs firing as this produces irreversible changes in the clay. It is only after firing that the article can be called pottery. The atmosphere within a kiln during firing can affect the appearance of the finished wares. An oxidising atmosphere, produced by allowing air to enter the kiln, can cause the oxidation of clays and glazes. A reducing atmosphere, produced by limiting the flow of air into the kiln, can strip oxygen from the surface of clays and glazes. This can affect the appearance of the wares being fired and, for example, some glazes containing iron fire brown in an oxidising atmosphere, but green in a reducing atmosphere. The atmosphere within a kiln can be adjusted to produce complex effects in glaze.