How bout a Kiwi Christmas 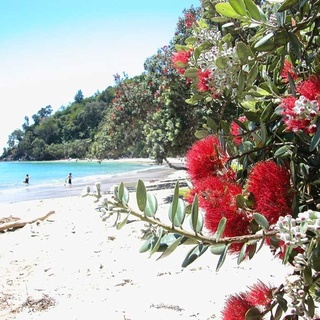 Christmas time in New Zealand doesn’t have anything to do snow and sleigh bells, quite possibly because of the 28c degrees average temperatures, so it’s about sun, sand, beaches or barbecues in the backyard with a few bevies to keep things cool! Eating is an important aspect in celebrating Christmas here. Some Kiwis take advantage of the fact that it is summer to enjoy their Christmas dinner at the beach with barbecues and picnics. A survey made of typical kiwi culture revealed that a surprising 72% prefer a roast dinner – more in keeping with Christmas in the northern hemisphere and an overwhelming majority – 94% – eat Christmas dinner at home, and three-quarters of us prefer it that way.

In New Zealand we tend focus more on the family thing than religion, in the survey I mentioned before, the question ‘Where would you prefer to spend Christmas?’, received the most replies stating they would prefer to stay ‘at home with close family, extended family or family and friends’. Nearly two-thirds felt that the very best thing about Christmas is spending time with family and friends. In fact only 10% of those surveyed suggested that religion was the most important thing about Christmas. While the religious importance of Christmas is respected, its focus has shifted to a family day. In New Zealand, unlike many other cultures, we dont have a day set aside for family celebration, so Christmas has become that day for us.

We even have our own Christmas tree with the magical Pohutukawa tree with its beautiful rich crimson flowers that bloom around December. It in essence has its own decorations and is stunning to see! This iconic Kiwi Christmas tree, which is often featured on greeting cards and in poems and songs, has become an important symbol for New Zealanders at home and abroad. The first recorded reference to the Pohutukawa as a Christmas tree was in 1867 when an Austrian geologist Ferdinand von Hochstetter noted that settlers referred to it as that. The Pohutukawa, he said was ‘about Christmas … are full of charming … blossoms’; ‘the settler decorates his church and dwellings with its lovely branches’. Other 19th-century references described the Pohutukawa tree as the ‘Settlers Christmas tree’ and ‘Antipodean holly’.

In December most Kiwis get ready for their annual holiday. They look forward to those lazy days at the beach or at the bach where they play games of backyard cricket, volleyball etc and cook their food on the ‘barbie’ with their holiday uniform of shorts, jandals and T-shirts being the staple clothing. From before Christmas until after the New Year, we usually take our summer holidays – some people have said it’s our end-of-year prize for being a New Zealander. I often hear British people talking about missing their white Christmas but I wouldn’t have it any other way, being at the beach etc is part of our ritual end of year thing!

We haven’t always had summer holidays. Of course, many of us still don’t – we want to , go to the movies or watch TV, and we expect everything to be available, so hospitals, power supplies, police and much more still run 24/7. And if we live on a farm, then summer means more work, not holidays.

The summer break as we know it started to be popular in New Zealand from the 1920s. Restrictions on work hours meant that people began to have clearly defined days off around Christmas from the late 19th century.

What are our Kiwi traditions as in what’s in and what’s out? A survey asked New Zealanders to vote for the activities they treasure and those that seemed to be on their way out. Just like voting for a favourite song or movie, some traditions made it onto both the ‘what’s hot’ and ‘what’s not’ lists.