Andy Warhol, famous for being famous? 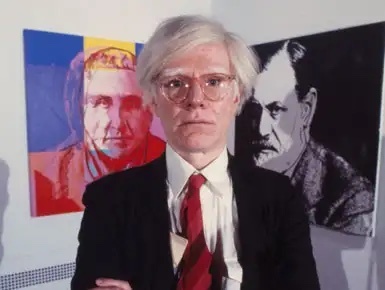 Andy Warhol aka Andrew Warhola was the main figure of  the Pop art movement as well as one of the most influential artists of the 20th century. His main claim to fame was for his avant-garde Pop Art paintings as well as his screen prints, but also because of his controversial lifestyle and his friendships with many celebrities, wealthy aristocrats and distinguished intellectuals. The nature of Andy’s artworks was highly controversial along with his very colourful life which included a near fatal shooting.

Andy was born on the 6th August 1928 to Slovak immigrants in Pittsburgh, Pennsylvania. He had two brothers, John and Paul.Their father Ondrej died in an accident when Andy was only 13 years old. Whilst still at school, Andy contracted an affliction of the nervous system called St. Vitus' dance that causes the person to have involuntary movements, jerking and spasming at random, this affliction is believed to be a complication from scarlet fever. Andy was bed-ridden a lot during this time and it was because of this that he became an outcast amongst the other students at his school. During this time he drew a lot as well as collecting photos and pictures of movie stars of that time. Years later Andy described this time of sickness as a very important part of his life in how it affected the development of his personality and the formation of his artistic ability and preferences.

In 1945 Andy entered the Carnegie Institute of Technology, where he majored in pictorial design. Upon graduation, he moved to where he found steady work as a commercial artist and worked as an illustrator for several magazines including Vogue, Harper's Bazaar and The New Yorker. He became well-known for his whimsical ink drawings done in a loose, blotted ink style which were shown at the Bodley Gallery in .

Throughout the nineteen fifties, Andy had a successful career as a commercial artist, winning several commendations from the Art Director's Club and the American Institute of Graphic Arts. It was during this period that he shortened his name from Warhola to Warhol. A common practice of artists and musicians was to alter their names to avoid stereotyping or to distance themselves or their art practices from family names.

In 1952 Andy Warhol had his first exhibition-a series of drawings based on the writings of Truman Capote at the Hugo Gallery. From there on, Warhol's work was exhibited in several venues throughout the fifties including his first group show at The Museum of Modern Art in 1955.

It was in the 1960s however that Andy Warhol began to make his most famous works, the paintings of American products such as the famous 's Soup Cans & Coca-Cola bottles as well as the comic strips like Superman & Popeye. Starting in 1962 he began making silk-screen prints of celebrities like Marilyn Monroe, Elvis and Elizabeth Taylor. This was a major turning point in Andy’s career as they brought him the fame, money and success he was after.

In 1962 Andy founded his infamous art studio, called The Factory. It was a place where he employed in a rather interesting and chaotic way "art workers" to help mass produce the prints and posters as well as other items such as shoes that Andy had designed. There were a wide range of artists, writers, musicians and underground celebrities involved with The Factory.

Critics attacked artists like Warhol for capitulating to consumerism. It set the tone for Warhol's reception, though throughout the decade it became clear that there had been a profound change in the culture of the art world, and that Andy Warhol was at the centre of that shift.

In 1964 an exhibition called "The American Supermarket was held in the Paul Bianchini's gallery. This show was presented as a typical small supermarket environment, except that everything in it (the produce, canned goods, meat, posters on the wall, etc.) was created by six prominent pop artists of the time, including the controversial Billy Apple, Mary Inman, and Robert Watts. Warhol's painting of a can of 's soup cost $1,500, while his autographed cans sold for $6 each. The exhibition was one of the first mass exhibition events that directly confronted the general public with both Pop Art and the perennial question of what is art.

In 1968 Andy Warhol was nearly fatally shot by a woman called Valerie Solanas, who sometimes visited The Factory and had given Andy a script to a film which she claimed he stole off her. Andy was briefly declared dead. Valerie arrived at The Factory and waited for Andy in the lobby area. When he arrived with a couple of friends, she fired three shots from a handgun at him. She then shot art critic Mario Amaya and attempted to shoot Warhol's manager, Fred Hughes, but her gun jammed. Just then, the elevator arrived and Hughes suggested she take it, which she did, leaving the Factory. That evening Valerie turned herself in to the police and was charged with attempted murder. Her statement to the arresting officer as well as at the hearing said that Andy Warhol had "too much control" over her and that Warhol was planning to steal her work. Pleading guilty, she received a three-year sentence. The attack had a profound impact on Andy and his art. The Factory scene then became much more tightly controlled afterwards and for the rest of his life, Andy lived in fear that Valerie Solanas would attack him again. He became afraid of other people touching him and some thought he had become asexual, apparently this wasn’t so.

Firmly established as a major 20th-century artist and international celebrity, Andy was given a major retrospective of his work at the which travelled to museums around the world.

Sadly, Andy Warhol died of complications during his recovery from gall bladder surgery on February 22nd 1987. He was an iconic artist who changed many aspects of the art world that affect modern day practices. Artists sometimes scoff that his work looked simple and was easy to emulate, the thing is though, he came up with the idea, he created them first and that’s the key factor!