Cartoons, cartooning, caricatures and so on.... 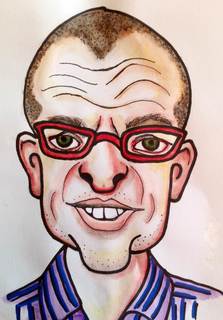 The word cartoon has various meanings, based on several very different forms of visual art and illustration. The original meaning was in fine art, where cartoon meant a preparatory drawing for a piece of art, such as a painting or a tapestry. The modern meaning refers to both humorous illustrations in print and animated films. Even more recently, there are several contemporary meanings, including creative visual work for electronic media and animated digital media. When the word cartoon is applied to print media, it most often refers to a humorous single-panel drawing or gag cartoon, most of which have typeset captions rather than speech balloons. The word cartoon is sometimes used to refer to a comic strip, and it can also refer to a humorous illustration for fiction or nonfiction published in newspapers and magazines.

A caricature is more like a portrait that exaggerates or distorts the essence of a person or thing to create an easily identifiable visual likeness. Caricatures can be insulting or complimentary and are often used in the political arena for the purpose of solely entertainment. Caricatures of politicians are commonly used in editorial cartoons as you see in most of our national newspapers.

So what about Comics then? Comics are a graphic medium in which images convey a sequential narrative. The term derives from the mostly humorous early work in the medium, and came to apply to that form of the medium including those far from comic. The sequential nature of the pictures, and the predominance of pictures over words, distinguishes comics from your usual picture books, though there is sometimes an overlap between the two. Most comics combine words with images, often indicating speech in the form of word balloons or speech bubbles. Words other than dialogue, captions for example, usually expand upon the pictures, but sometimes act in counterpoint.

These days’ comics are found in newspapers, magazines, comic books, graphic novels and on the web. Historically, the form dealt with humorous subject matter, but its scope has expanded to encompass the full range of literary genres.

The cartoony style uses comic effects and a variation of line widths for expression. Characters tend to have rounded, simplified anatomy.

The realistic style is the one developed for use within the adventure strips of the 1930s. They required a less cartoony look, focusing more on realistic anatomy and shapes, and used the illustrations found in magazines or newspapers. This style became the basis of the superhero comic book style, like the Superman or Green Lantern ones.

I’ve always wanted to give cartooning a go and almost had Boozehag turned into a comic strip with the idea of animating her. The board who looked at the project thought it was good idea but it came down to funding! One day maybe it will happen. I appreciate just how much work goes into such a project so I’m leaving that for a very distant rainy day I think!