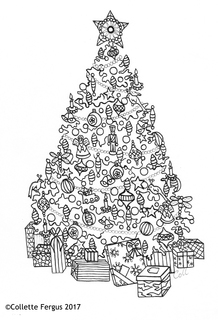 The traditional Christmas tree as we know it is a decorated evergreen coniferous tree which is usually meant to be real. There are Christmas tree farms that specifically grow these types of trees just for the Christmas period. The tree is a tradition associated with the celebration of Christmas and is often the centre piece to the whole occasion.

Most homes have a Christmas tree which is usually decorated as a bit of pre Christmas ritual. They are usually decorated with Christmas lights although originally candles were used for light; with all types of ornaments, garlands and tinsel and often colour co-ordinated like mine which has gold decorations. An important part is the angel or star that is placed at the top of the tree, representing the host of angels or the Star of Bethlehem from the Nativity.

The tradition of decorating an evergreen tree at Christmas started in Germany in the 16th century but the history of Christmas trees goes way back further than that..

For us in New Zealand the Pohutukawa tree (Metrosideros excelsa) with its crimson flower has become an established part of the New Zealand Christmas tradition as it blooms around Christmas time, the beginning of our summer. This iconic Kiwi Christmas tree, which often features on greeting cards and in poems and songs, has become an important symbol for New Zealanders at home and abroad that reminds them of Christmas.

This year I will be using my tree that I created out of an enormous amount of bubble wrap for a show we have here in Hamilton called Trees at the Meteor. Even though I didn’t win anything I think I got an excellent tree out of the deal and have kept it to use this year. Besides the fact our cats can’t climb it and knock off half the ornaments of which we usually find half chewed or rolling all over the floor for most of December; it also looks amazing with its large bike reflector star light and flashing fairy lights that make the bubble-wrap literally glow!

The ‘Trees at the Meteor’ kicks off again this Christmas season starting Tuesday the 15th December 2010. It’s a virtual forest of trees created by Hamiltonians everywhere and they bring mirth and amusement to many.  From Avante- Garde to Recycled to Kiwiana and Gadgetrees as themes so there is plenty to see or if you’re quick you can still enter now!  All the entrants are given fairy lights to use if they don’t have their own already and are buzzing brightly when they’re all lit up quite like a fairy land.  To have a look at the show, competition or even last year’s entries have a look at www.treesatmeteor.co.nz

So here’s the important information for you –

Image is a colouring page from Collette's range of Colouring books, you can find on Amazon