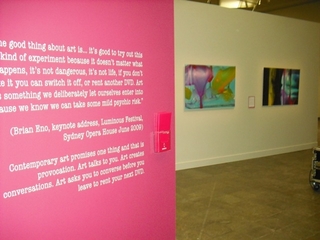 It was surprising to see a smaller turnout for the awards this year, especially after all the fuss that went down in 2009. Needless to say the controversy that usually is attached to this show probably won’t happen this year as there really wasn’t anything controversial enough to spark outrage or disbelief!

The winning entry although ‘different’ wasn’t out-standing to me, but then hey I imagine everyone in attendance would have made a different choice to  the next person as to what they liked the best and thought should have won, art is so subjective after all. To understand the winning entry, you really have to read its write up which talks about rendering the ink with bamboo skewers eyedroppers and horse tranquiliser syringes. It’s a story in words and images on paper-mache balls on what is going on around the world including the global financial crisis and the Iraqi war. A moving concept that you wouldn’t get if you simply looked at the balls in the middle of the floor!

My favourite piece was of vibrantly coloured paint skins that hung in long pieces around a metre in length, titled ’18 Colours as of April 30th 2010’ its write up left me wondering but its visual impact held quite a few viewers attention while we were there anyway!

A huge pile of multi colour rubber bands called ‘Nervous Disorder’  was intriguing, it reminded me of what I imagine a pile of veins, nerves and arteries would look like if removed from the body, I can only guess that’s what the artist intended as the write up on that, well,

Some of the writeups and or photos do not do the artworks any justice, ‘Heap’ is way more interesting and well done when you view it, in fact its photo lets it down terribly. ‘Belonging and becoming – the complete original works’ only shows one image of a large series in a concertinaed booklet of small photographs that I thought was quite interesting. As for ‘270,000 times smaller than me’ if it didn’t have a photo I would have missed it altogether, its extremely small size and where it is positioned was easy to miss and miss it I did, I had to be directed back to it!

There were some interesting comments on ‘The new anatomy lesson txt’ it stood out for the few I talked to, and although its interesting and even fastidious content did hold my attention briefly, I didn’t particularly like it.

‘Inverse Pink’ was an interesting entry; I liked its beautiful finish but would like to have seen the sculpture itself too! I also liked ‘My Antarctica (Ross Island), the photo didn’t show it off so well and believe me Meliors did put a heck of a lot of work into this piece, well done Meliors it looked amazing!

A piece titled ‘Remember’ caught my eye, it was a beautifully worked 3D piece that the artist had clearly gone to great pains to complete. It’s the sort of work you could hang on your wall and see new things in for many years to come, again its photo didn’t do it justice, but then hey its never easy to represent something like this in a small thumbnail image and get the message across is it!?

‘Untitled (Night-time Football’ really appealed to me,  it had nothing to do with football and was more a narrative on what might be being said just out of the viewers line of vision, I guess because it was more of a realistic work I enjoyed its content, was it included because of its interesting description and story-line? I do wonder as it wasn’t all that contemporary in the conceptual way, well in my opinion anyway! Still, I like it; it’s a piece I would buy if I was in the market!

This pile of rubbish was the most controversial piece in the awards winning history, each year does seem to see a really unusal winner and this topped the lot. Collateral by Dane Mitchell. I certainly learnt a lot about contemporary art after seeing this and questioning it. We can all learn something new and i certainly did 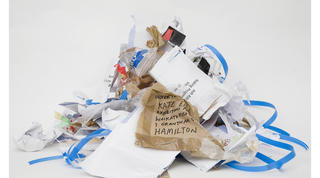