Cubism was a French school of art most prominent between 1907 and 1914. First developed by Pablo Picasso (who painted the piece titled Les Demoiselles d' Avignon in 1907.) and Georges Braque ( Le Viaduct de L'Estaque from 1907 also.); Cubism abandoned single-point perspective and instead subjects were presented from various viewpoints simultaneously. This broke the 'rules' of art that had been followed since the Renaissance. After Cubism, the world never really looked the same again: Cubism was one of the most influential and revolutionary movements in art. Pablo Picasso and Georges Braque splintered the visual world not in a bad way, but with a sensuality and beauty with their new style of art. They provided what we could almost call a God's-eye view of reality: every aspect of the whole subject, seen simultaneously in a single dimension.

Although Cubism is sometimes regarded as being a move away from reality, it was in fact an attempt to present more reality, showing different sides or facets, as if you were walking around an object rather than only seeing the view of the artist at the time of painting it.

In Cubism the subject matter was less important than the way it was represented. Early Cubist works represented objects, figures, and landscapes. Objects in the cubist style are broken up, analyzed, and re-assembled in an abstracted form—instead of depicting objects from one viewpoint; the artist depicts the subject from a multitude of viewpoints to represent the subject in a greater context. It’s not as simple as just breaking up the picture into squares as such. Often the surfaces intersect at seemingly random angles, removing a coherent sense of depth. The background and object planes interpenetrate one another to create the shallow ambiguous space, one of cubism's distinct characteristics. It developed into more cryptic and indecipherable works, in which the overall pattern became the most important. Early Cubist works were painted mostly in drab dull colours which I guess were the favoured colour schemes of that era; later on Cubists such as Juan Gris (Man in the café image below.)  and Fernand Léger (The Wedding.), used more brilliant colours. 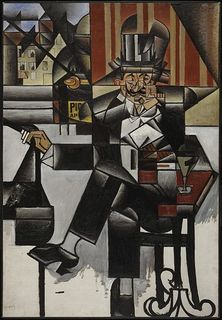 I remember first seeing the light come on when studying Picassos cubist works, what seemed like a hot mess to me suddenly made sense, and I'm still a fan to this day.

This is Les Demoiselles d' Avignon

I have done a few pieces myself but nothing compares to the masters. Here is one of mine titled "Picasso's Lover"

The name Cubism was created by the art critic Louis Vauxelles, from a remark made by Matisse about Braque's painting of "little cubes." The late work of Paul Cézanne is credited as being a catalyst for Cubism as well.

Cubism is not an art movement confined just to art history though; in fact its legacy continues to appear in the work of many contemporary artists today. Not only is cubist imagery regularly used commercially but significant numbers of contemporary artists continue to draw upon it both stylistically and perhaps more importantly, theoretically. I myself use some cubism in my work.

Have a look here artcyclopedia-cubism for a list of cubist artists and their works, and what Museums you can find them in around the world.

Tags: what is cubism  cubist artists