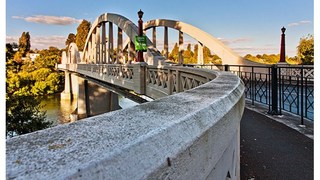 Fairfield Bridge is an iconic landmark in central Hamilton. Artists focus on it when painting or photographing scenery in the city, meaning I have seen many different versions over the years that have come through the gallery or appeared at different shows.

I really admire well done versions, especially ones that have a bit of thought put in. The bridge is an art deco delight with three flowing concrete arch expanses that rise and fall a like ribbon. The best images I have seen are artistic angles utilising the coloured lighting from below and a lovely piece I saw that was a mixed media woodcut print on ripped paper that focused on the old fashioned lights that run the length of the bridge.

The bridge was opened to the public in 1937, at the time the Hamilton Borough's population was approaching 16,000. The roads were becoming increasingly congested when it was built as there was only one other bridge at that time. The proposed bridge was seen as controversial by a lot of Hamiltonians who claimed it was too far out and would never be used. At the time of construction it was in the countryside and locals would use it as a walkway to the countryside. By the 1950s the bridge was well inside the city boundaries as Hamilton continued to grow in size and population and today it gets extremely congested even with several more bridges added further up the river.

The concrete bridge was constructed by a local company, Roose Shipping Co Ltd. Work started in August 1934 and soon after they began drilling they found an underground forest that no one had been aware of. Logs were so hard they had nearly turned to coal causing an unforeseen delay in completion of the bridge. The structure which was 457 feet long consists of three bowstring trusses and two land spans all in reinforced concrete. The aggregates used throughout the job were crushed metal from Smeed's quarries at Tuakau.

Fairfield Bridge was paid for by the New Zealand Government, Waikato County Council, Hamilton Borough Council and the Waipa County Council. The bridge is still in use today and in good condition. It did need repairs in 1991 due to concrete cancer at a cost of $1.1 million.

In 1991 a Hamilton motorcyclist Jonathan Bennett pulled off a daring stunt by riding over Fairfield Bridge's iconic concrete arches. In a video which was posted on YouTube, Jonathon who is the leader of the Mormon Few Stunt Crew and a ‘Motortimes Magazine’ columnist, rides over the bridge's arches on his 250cc 100kg Beta Techno trials bike. Check out the video here - https://www.youtube.com/watch?v=KE9qbYju-lY

The arches are only 70cm wide, and at their highest point are 7.9 metres above the road. It only took him 60 seconds to ride over the three humps. It was all done professionally with help from a support crew, including camera operators and a first-aid person in case he fell; they made sure that the public wasn’t at risk, however authorities didn’t take too kindly to it and the YouTube video removed. Apparently he wasn’t the first to make the ride but there isn’t any video evidence of others doing it as far as I am aware!

The bridge will always be an iconic feature for Hamilton, with most bridges these days being made in a more simple construction; they simply cannot compete with Fairfield Bridge’s artistic viewpoint.