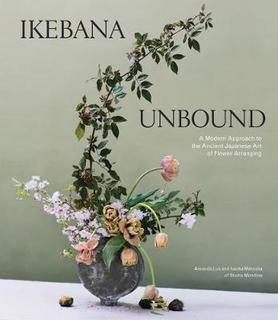 I have a book in my bookcase called ‘A Guide to Japanese Flower Arranging’ and I’m about to embark on creating some of the designs as I think they’re so simple and stunning looking. Im not sure how simple they are to recreate but I’m sure it’s going to be fun having a go.

Japanese flower arrangement has for several centuries provided an artistic outlet for the people of who are known to be sensitive to the beauty of nature.

Ikebana as it known in , is probably more popular today that at any other stage of its long history.

There are basic techniques but like other art forms it is infinite in what you can create.

Ikebana is more than simply putting flowers in a container; it is a disciplined art form in which nature and humanity are brought together. Contrary to the idea of floral arrangement as a collection of parti-coloured or multi-coloured arrangement of blooms, ikebana often emphasises other areas of the plant, such as its stems and leaves, and draws emphasis toward shape, line and form. Though ikebana is a creative expression, it has certain rules governing its form. The main rule is that all the elements used in construction must be organic. The artist's intention behind each arrangement is shown through a piece's colour combinations, natural shapes, graceful lines, and the usually implied meaning of the arrangement.

Another aspect present in ikebana is its employment of minimalism, which is what attracts me to it. That is, an arrangement may consist of only a minimal number of blooms interspersed among stalks and leaves leaving it looking more like a delicate sculpture rather than a vase full of flowers. The structure of a Japanese flower arrangement is based on a scalene triangle delineated by three main points, usually twigs, considered in some schools to symbolise heaven, earth, and man and in others the sun, moon, and the earth. The container is a key element of the composition, and various styles of pottery are used in their construction.

Ikebana in the beginning was very simple, arrangements were constructed using only a few stems of flowers and evergreen branches. Styles of ikebana changed in the late 15th century and transformed into an art form with fixed instructions. There are many styles that include

Momoyama, Rikka, Chabana, Nageire, Seika or Shoka style and Jiyuka which is a free creative design. It is not confined to flowers as every material can be used.

In the 20th century, with the advent of modernism, the three schools of ikebana partially gave way to what is commonly known in as Free Style which sounds a bit more what I’m into artistically! So Im off to buy some orchids and Pussy-willow as I like one of the arrangements in my book that uses only these two items, wonder what my chances are of getting pussy-willow at this time of year!