Every now and then a painting surfaces that has been created by someone considered evil or infamous in some manner, the first time I ever heard of one was in a book about Hitler who the world knows as the most evil person from World War 2. Most however do not know that he also dabbled in art,  in fact  he was a remarkably prolific artist, it is estimated he created between 2000 and 3000 drawings, watercolours, and oil paintings. His artistic talent revealed itself at an early age and he continued painting and drawing throughout his life. Even while behind the front lines in World War 1, he continued to paint in his spare time and contributed instructional drawings and cartoons to the military newspaper. His art continued throughout his leadership of and included detailed building plans, furniture design, city planning, and monuments. For such an evil persona to create things of beauty seems almost surreal, but he did! I do wonder what type of collector buys his art these days. 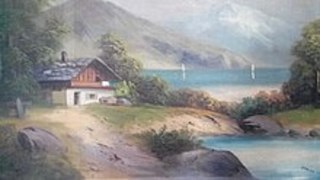 What about sales of art by the Kray twins? Well just in the last year eight paintings by the infamous Kray Twins, ’s most notorious criminals, were privately sold for $25,847.00 NZD by an anonymous vendor. In total, seven landscapes and one seascape by the twins were sold, all of which had been painted in HMP Parkhurst and Broadmoor prisons. Whilst the estimated value of the paintings was only $1000.00-$1600.00 each, an image of the two brothers crossing a field in top hats fetched a $3,920.00, becoming the most expensive sale of the day. Other paintings included a signed portrait of Reggie and Ronnie Kray that had been painted by a fellow inmate. They weren’t even that great, it was more about their creators than what they created it seems!

The whole thing of buying and selling art by infamous people intrigues and concerns me. There are many reasons why Paintings become famous, rarity, quality of course and then infamy are just a few but the truth is the reason why certain Artists have become famous and therefore their surviving Paintings famous and popular is that when you look really hard at the Art-World over the centuries and the Hundreds of Thousands of people that sort to ply their trade as an Artist, then you are forced to the conclusion that not many of them were really that talented at all, consequently  any work they produced never has a chance of entering the list of famous paintings other than through infamy.

On occasion I have seen artists who have talent, try to fast track their success by painting something considered taboo or pushing the line with regards to tastefulness. An NZ artist whose work I thought was well done did a painting of an infamous crime scene from only recent times, the guy who she portrays as the guilty party in her painting has since been acquitted with the debate from those who think he did it and those who think he definitely didn’t still raging. I feel it was inappropriate myself to make such a statement on something you can’t be sure is correct or not and a little surprising that the current affairs shows interviewed her over this painting considering. Yes she got her five minutes of fame but was it worth the flak she probably got over it from his supporters? I doubt it.

What I’m trying to say here is that before you do something considered risqué in what you do with your art, think twice before doing so, check with others on what the likely repercussions could be, as it could make or break your career, and is it worth loosing face over an artwork? I know I myself have almost stepped over the ine, being pulled back in by my advisors who have less artistic skills and much more sense than I do!

The featured image shows my tounge in cheek newspaper article about changing the New Zealand flg, it was more a publicity stunt than anything serious, just getting people to think about what does the flag really mean to you. It fired up many people and I got both support and abuse, something I didnt expect. Now I say be careful what you wish for!