Knitting, yes its an art too! A bit about Yarn Bombing and knitting 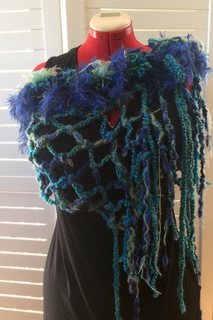 I can’t knit, there I’ve said it! My Gran tried to teach me but she gave up after I created a triangle instead of a square when I was making an attempt at a scarf one school holidays!

I guess knitting has taken a huge downturn in recent years, just like sewing, as clothes and knitted goods are so cheap to buy it’s not worth making it yourself normally!

That leaves passion and art then, in that only the diehard creative types usually do such stuff and just a quick look at Google shows there are some amazing practitioners out there. Take a look at the following sites – 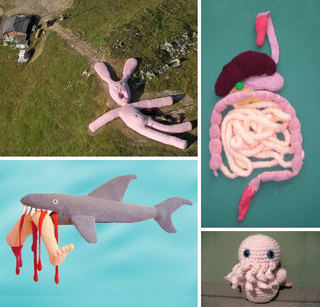 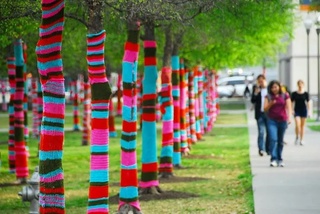 David Charles Fox (above) explains yarn bombing, click on the link or photo to go to their site for more info but generally speaking this is the definition - Yarn bombing is part street art, part graffiti, and part activism, which combines the seemingly “cute” and comforting elements of knitting and crocheting, with the revolutionary and mild civil disobedience of graffiti / “tagging” of public objects, in order to make some sort of artistic statement. 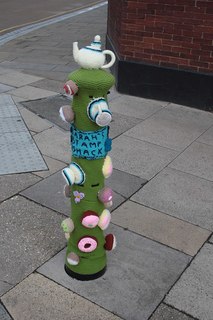 This pillar got a real upgrade with teapot and cups, a lot of work would have gone into that, not being a knitter I totally appreciate the skill and effort. This one was done for a street festival in the UK

There is a knitting book titled 'Knitting Art: 150 Innovative Works from 18 Contemporary Artists by Karen Searle  (pictured below) there is soome very cool knitted art in that, click on the image to check it out on Goodreads. 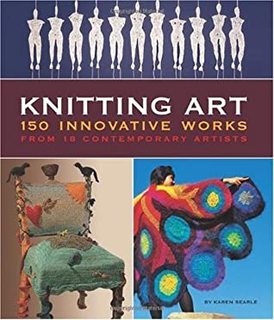 So where did it all start? The oldest artefact with a knitted appearance is a type of sock according to google. It is believed that socks and stockings were the first pieces produced using techniques similar to modern day knitting.  These socks and stockings were created using fabric strips (possibly from worn out clothing) which was held together with lots of knots or loops using a single needle and thread so more like sewing i guess, although most of them looked more like knitting in appearance.

Most history lessons on knitting place its origin somewhere in the Middle East, I have visions of Cleopatra in toe socks as this was something seen in old clothing from that era. It then spread to Europe by Mediterranean trade routes, and then to the USA with European colonization. The earliest known examples of knitting have been found in Egypt and cover a range of items, including complex colourful wool fragments and indigo blue and white cotton stockings, which have been dated between the 11th and 14th centuries.

The 1980s saw the popularity of knitting decline during in the Western world. Sales of patterns and yarns slowed up, as the craft was increasingly seen as old-fashioned and children were rarely taught to knit in school. It didn’t help that the increased availability and low cost of machine knitted items meant that you could buy knitwear at the same cost of purchasing the wool and pattern themselves, or often for far less.

The 21st century has seen a resurgence of knitting. Natural fibres from animals, such as alpaca, angora, and merino, as well as plant fibres such as cotton, have become easier and less costly to collect and process, and therefore more widely available. Exotic fibres, like as silk and bamboo, are growing in popularity as well. The yarn industry has started to make novelty yarns which produce stunning results without years of knitting experience. Designers have begun to create patterns which work up quickly on large needles, a phenomenon known as instant-gratification knitting.

Celebrities including Julia Roberts, Winona Ryder, Dakota Fanning, and Cameron Diaz have been seen knitting and have helped to revive the craft. The new millennium has also seen a return by men to the art of knitting. Just check out Google there are even sites specific for men knitting….who would have thought! It also had a resurgence in the covid pandemic when people were forced to stay at home and isolate.

Now I did say I can't knit but I did creae the shawl in the main picture, it is more a braided art piece than actual knitting but I think it still qualifies. I get many complimens on this when I wear it.