Why is mass produced art wrong? 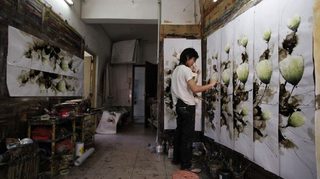 I found this article http://www.stuff.co.nz/s/QPRe  on the net yesterday and have to admit I was highly surprised that it’s still going on, all this ripping off of innocent people, and in my own city at that! I guess it’s not really the sort of thing you talk about much though as art isn’t exactly a big thing in an agricultural based city. But we need to get the word out so that it stops happening. 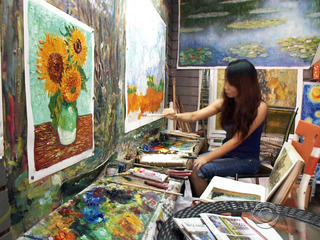 Don’t get me wrong I strongly believe that beauty is in the eye of the beholder and if someone fancies one of these artworks and know what they are purchasing then good for them. Some I have seen aren’t too bad either; they’ll never be investment pieces and won’t increase in value in fact if anything they will decrease. The painting you paid $150 or more for will have a clone at the local second-hand store selling for $2. That price is often all these art rip-offs are really worth.  So sadly you are unlikely to make back your investment of $150 - $300 plus framing (Ill talk more about framing in a minute.) so lets hope you brought it because you really really liked it not because you liked the lovely poor student who sold it to you or you thought it was likely to be valuable in years to come!

So who do we hold responsible for these scams, the people going round portraying these artworks as their own work and selling them for up to 100 times more than they are worth or the people in China/India or Thailand who run the sweatshops? It wouldn’t matter so much if the poor artist who created the artworks were being paid at least half the sale value so they could feed their families better and perhaps have a chance to leave poverty behind, but it doesn’t happen that way. They work in shocking conditions cranking out multiple copies of these artworks for minimum pay. In fact the worst of these companies have a conveyor belt system where a group of artists all work on the same piece, one does the sky, the next does the historic building who then passes it on for someone to do the water and so on. You should see them doing Mona Lisa’s or Van Gogh’s Sunflowers, they’re really good it after the 1000th time! The signature you usually see on the bottom of these artworks will quite likely be that of the guy selling it to you, often done in vivid marker (A dead giveaway!) but that’s only to keep up the pretence that he created the painting. Don’t be fooled. 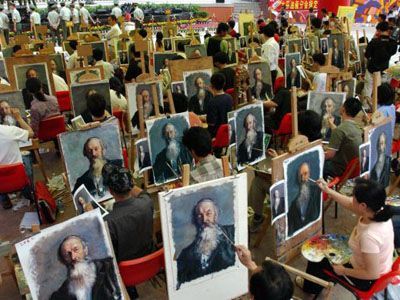 Now I am the last person to say to someone when they show me their lovely new painting “Oh you’ve got a Hong Kong Horror, did you know you have been scammed and some poor little Chinese/Indian/Thai person was only paid $3 for that. The story usually goes, a lovely student came to my door selling his artwork to fund his studies or trip around so I brought two of them, bless him. They then tell you that it only cost them only $150 - $300 depending on how good a scammer the ‘poor student’ was as to how much they can sell their ‘original artworks’ for. Anyway back to the framing I said Id talk about that aspect. As you know I work in a gallery and we do framing as part of our service. Ive given up counting how many times people come in with their HKH’s and recoil in horror at the cost of framing them. These artworks are usually on loose canvas so they need stretching as well as framing which means twice the price as its pretty much two frames that are needed never mind if the customer wants fancy imported Italian frames or added inserts etc etc. Sometimes the HKH owner has just returned from China/India or Thailand and managed to bag themselves a bargain and got their art on the street, by-passing the ‘poor student’ and only paying around $20 for their piece. Imagine their horror when they find out that framing it costs a lot more than the original purchase price. Mind you, if you’re going to buy really really cheap art you’re not going to have a clue about framing costs are you!

Sometimes the ‘poor student’ will even organise framing for you at a discounted rate…telling you not to go local as they will rip you off. One person I know personally, told me about this when showing me their lovely new artworks, I didn’t have the heart to tell her that the price she paid was around the same as the local gallery would have done it and that chances are it was probably done in the local gallery anyway, the student getting bulk pieces framed up, would get a discount but they would hardly pass that on to their duped buyer. And better yet, do you really think they are taking a ‘poor framing student’ around with them or sending the painting back to China/India or Thailand to be framed….its being done locally, think about it!

One village in China (They call it the McDonalds of the art world!) Dafen exports around 5 million paintings a year to western countries to fuel the western desire for cheap art, check out the whole article here https://www.wired.com/2014/04/china-art-reproduction-susetta-bozzi/

Interesting to note too is that it isn’t just limited to Asian countries, its even closer to home in that Australian Aboriginal art is also being exploited, click on the photo below to read the article about how they are being exploited. In fact it would not surprise me if it is still happening today. 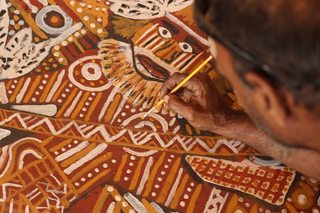 So are we helping them by buying this art or are we hurting them?

Tags: why mass produced art is wrong  what are hong know horrors