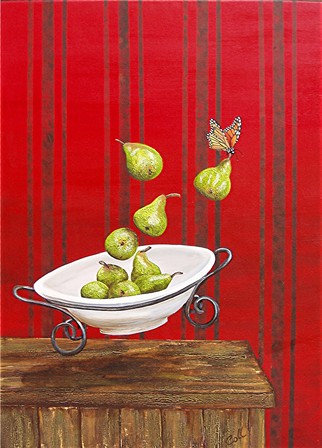 Monarchs often appear in my art work. I think they are the most beautiful butterflies you can ever see and I’ve seen many. The butterfly house in has some amazing species of butterfly and vibrant colours, but nothing surpasses the humble Monarch for me. I think its helped along by being one of many children brought up with a swan plant in the garden and able to view the life cycle of these wonderful creatures. Their brilliant green chrysalis with its hints of gold certainly helps hold that fascination for many also. 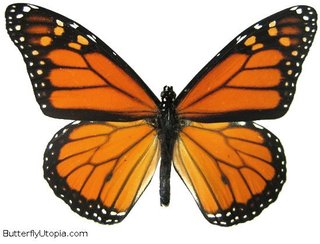 What do we know about the Monarch butterfly? It originally came from North America and was found in early in the 19th century. I actually thought we were the only country to have them until I studied it further. In Europe it is seen in the Canary Islands, the Azores, and in Madeira, and is found sometimes in . Its wings feature an easily recognisable orange and black pattern, with a wingspan of 8.9–10.2 centimetres. Interesting to know that the female Monarchs have darker veins on their wings, while the males have a large black spot which can be found in the centre of each lower wing, which is where its pheromones are released from. Males also have straight edged wings, whereas females sweep in a pretty curved shape. Males tend to be slightly larger. The upper side of the wings for both sexes is darker orange with the veins and margins being black. From there the margins are in two series of small white spots. The fore wings also have a few orange spots near the tip. The underside is similar but the tip of the top wing and bottom wing are yellow-brown instead of darker orange and the white spots are usually larger.

Like all insects the Monarch has six legs; however it uses only four of its legs as it carries its two front legs against its body.

Monarch eggs are usually a creamy white. They will slowly turn a pale yellow colour. They are long in shape and conical, with approximately 23 ridges down their sides and many fine lines crosswise they look like little upside down pots and are usually laid on the underside of leaves on the swan plants. A single egg measures around about 1.2 millimetres high and 0.9 millimetres wide

The Monarch caterpillar is quite a beauty in its own right; it is banded with yellow, black, and white stripes. The head is also striped with yellow and black. There are two pairs of black filaments, one pair on each end of the body so it often looks like it could be two headed. The caterpillar will grow upto a length of 5 cm.

The next stage of its life is the chrysalis, my favourite part which is the beautiful vivid green I mentioned earlier. It’s more of a pale lime green like japanese jade with a band of black and gold on the end of the abdomen. There are other gold spots on the thorax, the wing bases, and what they call the eyes.

Many people like to attract monarchs by growing a butterfly garden with a specific milkweed species of plant called a Swan Plant. We had these many times over the years as its so much fun to teach kids the lifecycle watching them change and evolve.

You have to be aware of Large having too many caterpillars on your swan plant as even if its a large one they will soon eat through the foliage of the plant to the point where it will be stripped of all its leaves and left to die. It’s recommended to prevent this by placing a small clear plastic bag over a small portion of the foliage at the end of one branch. Tie it in a way that no caterpillars can get to eat the foliage inside the bag. You punch very small holes in the bag so that the foliage can breath and moisture can escape the leaves will survive. By doing this it will save the plant and once the caterpillars have finished for the season the swan plant can regenerate for next summer. You simply remove the bag when caterpillars are finished for the season giving the plant a good chance of survival; I wish I’d known that many years ago as I could have saved many of my swan plants.