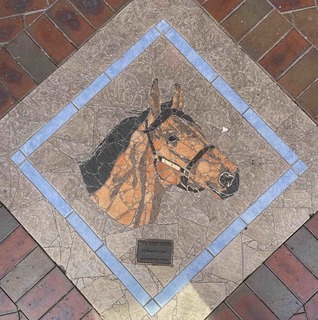 I must confess Im not a huge fan of mosaics although some artists who work in this medium do impress me. I myself probably wouldn’t ever try it, I don’t like stuff that gets all dirty and under my nails like grout or clay so it’s not on my agenda, tragic I know but we all have our little idiosyncrasies after all! Well thought out and well done mosaics are impressive and I admire the hard work that’s gone into them.

So what do we know about mosaic art and where it comes from.

Mosaic is the art of creating images with an assemblage of small pieces of coloured glass, stone, or similar materials which are placed together to create a unified whole. Materials commonly used are marble or other stone, glass, pottery, mirror or foil-backed glass, or even shells.

The term for each piece of material is Tessera or plural tesserae. The term for the spaces in between where the grout goes is the Interstices. Andamento is the word used to describe the movement and flow of Tesserae. The 'opus', the Latin for ‘work’, is the way in which the pieces are cut and placed.

The disadvantage of the direct method is that the artist must work directly at the chosen surface, which is often not practical for long periods of time. It is today considered unsuitable for large scale projects. Also, it is difficult to control the evenness of the finished surface. This is of particular importance when creating a functional surface such as a floor or a table top.

The indirect method of applying tesserae is the usual technique for very large projects, like ones with  repetitive elements or for areas needing site specific shapes. Tiles are applied face-down to a backing paper using an adhesive, and later transferred onto walls, floors or craft projects. This method is most useful for extremely large projects as it gives the maker time to rework areas. Mosaic murals, benches and tabletops are some of the items usually made using the indirect method, as it results in a smoother and more even surface.

The double indirect method can be used when it is important to see the work during the creation process as it will appear when completed. The tesserae are placed face-up on a medium (often adhesive-backed paper, sticky plastic or soft lime or putty) as it will appear when installed. When the mosaic is complete, a similar medium is placed atop it. The piece is then turned over, the original underlying material is carefully removed, and the piece is installed as in the indirect method described above. In comparison to the indirect method, this is a complex system to use and requires great skill on the part of the operator, to avoid damaging the work. Its greatest advantage lies in the possibility of the artist directly controlling the final result of the work, which can be important with things like the human figure that needs to accurate.

The earliest known examples of mosaics made of different materials were found at a temple building in Ubaid, , and are dated to the second half of 3rd millennium BC. They consist of pieces of coloured stones, shells and ivory. Excavations at and Choqa Zanbil show evidence of the first glazed tiles, dating from around 1500 BC.

Mosaics of the 4th century BC are found in the Macedonian palace-city of Aegae and they enriched the floors of Hellenistic villas, and Roman dwellings. Splendid mosaic floors are found in Roman villas across north Africa, in places such as , and can still be seen in the extensive collection in in . In , Nero and his architects used mosaics to cover the surfaces of walls and ceilings in the Domus Aurea, built AD 64.

In 2000 archaeologists working in uncovered a 30 ft length of five colourful mosaics created during the 1st or 2nd century. The mosaics show a warrior in combat with a deer, four young men wrestling a wild bull to the ground, and a gladiator resting in a state of fatigue, staring at his slain opponent. The mosaics decorated the walls of a cold plunge pool in a bath house within a Roman villa. The gladiator mosaic is noted by scholars as one of the finest examples of mosaic art ever seen — a "masterpiece comparable in quality with the Alexander Mosaic in ."

Often Mosaic art is seen as a craft type art rather than a serious fine art. You see examples of it more often in craft markets and fairs than galleries; however that is slowly changing as artists become more skilled in their creations and produce high quality pieces. Like any art there are a good mosaic artists as well as not so good, its all relative after all! Just like any other industry or skill set.