The most Famous Painting in the World 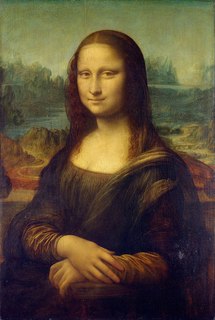 I really like Leonardo da Vinci’s Mona Lisa painting. I don’t buy into the secret smile stuff though, in fact I cant even see what the fuss is about, so why you ask, do I like it so much….read a funny chick lit novel a few years back where the main character worked in an art gallery and like in real life (I get these types of calls too so I can verify that statement!) a customer calls her up and describes this painting he has that he is sure is worth a lot of money, the book is called Lovestruck by Melanie La’Brooy in case you are into chick Lit, anyway here’s the description, Quote…. “ yeah, it’s an oil painting. It’s of a woman. She’s not a real good look, looks like she’s been hit with a spade in fact. She’s wearing a green dress and it’s a bit brown in the background. There’s some hills and things behind her. She’s got long brown hair and kind of a tight-arse expression on her face like she needs a good root.” End of quote…… At that stage I was nearly in hysterics as even before I read the heroine’s response I knew he was talking about the Mona Lisa.  And that’s the moment I fell in love with it! It had become earthed for me and so very real. Now don’t get me wrong Im not saying the painting is a joke or that its bad, just that I could imagine the above description applying to the sitting at the time it was painted and that it was quite likely many people see it that way today; especially those who didn’t have the same appreciation for classical art as others do! Lets face it she does look rather uptight!

So anyway the Mona Lisa is the most famous painting in the history of art and it continues to inspire many reproductions, parodies and many a scientific theory

The painting recently celebrated it’s 500th anniversary as it was created during the four years 1503 to 1506. It is thought to be of a married woman named Lisa Gherardini when she was around 24 years old, although another interesting rumour claims that the Mona Lisa is really a secret self portrait of Leonardo da Vinci himself as a woman; it is actually widely accepted that the portrait is really of Lisa Gherardini.

An interesting story I heard says that Leonardo carried this painting with him everywhere he went and that he would pull it out to show people claiming it to be his best painting ever. The theory goes that he was performing some sort of viral marketing of the time and that he made the Mona Lisa appear to be his best painting ever in so many people’s minds that they came to believe it. This is an interesting concept and not that hard to believe.

There are many rumours about this painting including what happened to her eyebrows if anything at all. Some claim they were accidently removed during an art restoration although I find this hard to believe, as knowing a bit about restoration Im sure  the restorer would have painted them back in. Its more likely that there never were any to start with as the fashion of the day was to pluck or shave them into non existence!

So how come the painting resides in France rather than Leonardo’s home country ? Well the French King Francois I who was known to be an acquaintance of Leonardo da Vinci, he came to own the Mona Lisa sometime during the 16th century. In the early 1900’s it toured , then the sometime in the 1960’s and then and in the 1970’s. Today it remains in Louvre at the Salle de Etats where it is seen by millions. Its is behind several layers of bullet proof glass and viewers usually only get a quick look at it as the queues are always long and one must keep moving. It always seems to surprise everyone how small it is and it certainly must be for Leonardo to be able to carry it around in his man bag.

Its actual measurements are 30" in high by 20 7/8" wide (77cm by 53 cm) keeping in mind it was originally larger but when cut from its frame in one art hoist during one of the times it was stolen it has been reduced in size.

The Mona Lisa became an image of universal culture in advertising and has inspired many a kitsch reproduction and admiration that is even more far reaching today with the Internet. It is considered to be inestimable and considered priceless so is it not insured these days. Not surprising considering the successful attempts at the theft of it.

An interesting artwork that will continue to haunt many with its secrets that I doubt will ever be revealed.

Im entertaining the idea of doing my own version, anyone want to join me?

Tags: most famous painting in the world  mona lisa painting