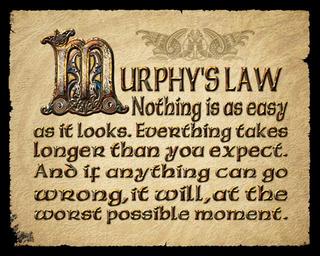 This commonly expressed sentiment means "If anything can go wrong, it will." Many problems, failures, and annoyances are attributed to Murphy's Law, but most people do not know where the name came from. Murphy's Law is usually thought to be named after Captain Edward Murphy, a development engineer with the United States Air Force. In the 1940s and 1950s, he was working with acceleration and deceleration experiments at Edwards Air Force Base. Murphy's Law most likely originated during his projects with Dr. John Paul Stapp. The phrase was coined in adverse reaction to something Murphy said when his devices failed to perform.

The name of Murphy's laws wasn’t actually the original name for 'if anything can go wrong it will'  it was actually “Sod's law” because” it would happen to any poor sod who needed such a catastrophic event the least.” Sod's law was around long before any living man and has existed in many forms for hundreds of years. It to have been around for generations longer than Murphy has been around and is well known. The original name was replaced by Murphy because the word sod is considered a cursory term so is not considered PC to use anymore.

So what about the Irish connection? Well, a lot of the British think that Murphy's Law is an Irish joke. Murphy itself is an Irish name of course, and the Irish have been the butt of jokes from the Brits for a long time.
Anyway, apparently a lot of Brits seem to think that what Murphy's Law refers to is that the Irish are to blame for things going wrong because they are careless or stupid or both, at least according to British mythology on the Irish, not my thoughts after all I have Irish heritage myself!.

Many variants of Murphy's Law exist in today's culture. It is generally accepted, for example, that bread will always land butter side down when dropped and that there will be rain as soon as you wash your car, and that you will always pick the line in the supermarket or bank that has the person wanting to use all their 10cent pieces from the past 5 years. People have even been known to try to use Murphy's Law to their advantage, for example, washing cars so that it will rain.

So Murphy's Law, which states that if anything can go wrong, it will, and it applies to art and painting too... So for a bit of fun let’s see what we can come up with….

1) Murphy’s Law says that the chance on the palette falling with the paint side on your carpet depends on how new and expensive the carpet is.

2)When you are all organsied and ‘zoned’ to begin painting, the door-bell will ring and it will that friend or relative who how has all day to stay and chat.

3) “Ill quickly just add this bit” -  NEVER EVER quickly add something to a painting when you're already dressed to go out somewhere and think you have time to do it Murphy’s Law dictates that you will get paint on your good clothes. Of course you can wear an apron to take off, but then its not the same rule anymore, its more like you will sit on an open tube instead because it has to get your good clothes somehow!

4) Murphy’s Law says if you have a cup of coffee or glass of wine near the water jar you have for cleaning your brushes, you will dip your brush in it at least once or twice. I have done this a couple times myself.

6) If you think your painting is still wet, chances are it will be. Murphy’s Law says that if you touch it, it will be, so resist the temptation.

7) Murphy’s Law says that when you are working on more than one painting, your favorite brush or tool of choice will always be next to the other painting

8) When you use aerosol varnish, Murphy’s Law says it will run out midway through spraying the last canvas.

9) Murphy’s Law says that when you put a lot of acrylic paint onto your canvas to cover a large area and begin spreading or blending it, the phone or doorbell will ring. And the hold up will be long enough for the paint to dry completely before you get back to it.

10) If you have paint all over your hands, the phone will always ring according to Murphy.

11) Murphy’s Law says that if you go ping and can’t remember what paint colours you need, you will buy the ones you already have more than enough of.

12) Your favourite colour will always have the lid missing and be dried up when you need to use it to match something urgently.

14) If you don’t pick up that tube of paint you dropped without its lid on, Murphy’s Law states that you will definitely stand on it.

So what happened to Murphy anyway, well one dark evening (in the U.S.), Mr. Murphy's car ran out of gas. As he hitchhiked to a gas station, while facing traffic and wearing white, he was struck from behind by a British tourist who was driving on the wrong side of the road.