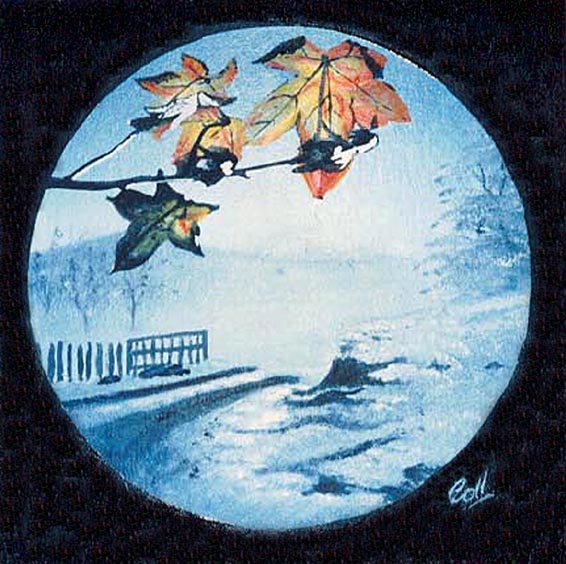 Winter is our coldest season; it comes between autumn and spring. In a lot of artworks it is portrayed as white and snowy, especially in four way paintings showing the same scene in different seasons.

People associate hibernation and isolation with winter, I guess because they tend to stay home more as its not as pleasant going out in the cold and wet now is it. In some places like you literally get snowed in and can’t leave certain areas until spring but with the way things are these days it’s rare.

One thing I like about winter are the pretty snowflakes, even though they’re hard to see with the naked eye, it’s the perfect designs of nature that so impress me. The geometry of snowflakes was first recognised in 1611. They were described as having a hexagonal symmetry as each flake although different had exactly the same number of sides and matched each side perfectly.

Ice crystals formed in a well-controlled laboratory conditions are often thin and flat. These planar crystals may be in the shape of simple hexagons, or if the super-saturation is high enough, they develop branches and dendrite (fern-like) features and have six nearly identical arms. The shape of each snowflake is determined broadly by the temperature and humidity at which it is formed. On rare occasions snowflakes will form in threefold symmetry or in layman terms, triangular snowflakes; this only happens when the temperature is around −2 °C (28 °F). The most common snow particles are visibly irregular, although near-perfect snowflakes may be more common in pictures because they are more visually appealing.

In a lot of artistic representations, snowflakes are often five - or eight-sided. In nature, snowflakes do form 3-sided or 12-sided figures, as in halving or doubling the normally 6-sided crystal arrangement, but the other representations are actually scientifically inaccurate.

Believe it or not, it is next to impossible that two snowflakes are exactly alike due to the roughly ten water molecules which make up a snow-flake, they all grow at different rates and in different patterns depending on the changing temperature and humidity within the atmosphere that the snowflake falls through on its way to the ground. Initial attempts to find identical snowflakes by photographing thousands of them with a microscope back in 1885 onwards by a guy called Wilson Alwyn Bentley, discovered the wide variety of snowflakes we now know about today. It is more likely that two snowflakes could become virtually identical if their environments were similar enough.

We see the snowflake as a traditional seasonal image/motif and it is often used around the Christmas period, especially in , representing the traditional White Christmas. It just doesn’t seem so effective in places like when Christmas time here falls right in the mids of our hot summer season. Its quite popular in the former Soviet Union to make paper snowflakes by folding a piece of paper several times, cutting out a pattern with scissors and then unfolding it as a Christmas decoration, the resulting paper snowflakes are then dipped into milk and glued to windows.

Snowflakes are also often used as symbols representing winter or cold conditions. For example, tires which enhance traction during harsh winter driving conditions are often labeled with a snowflake, or air-conditioning units are more universally recognized if a snowflake is used as its symbol than a name or title. A snowflake was the symbol of the 2002 Winter Olympic Games in .

This is a Poem about Winter by Eric Ashford where the author used one of my very early paintings from the 1980s for inspiration,

A snap of blunt air
and I am thin on the ground.
Breakable bones of frost
burst into powder plumes
of vision.

I am out in the cold now
mind-weaving through the wind
as I shovel my hands
into dreaming pockets.

The chill leaves a vapor trail.
Heat signals like the moving motifs
of melting clouds.
A steam that converts thought
into poetry.

November sucks its leaf blowing reality
into the engine of my heart
where a few words become
crow-black enough to be seen.