Leonardo, anatomy and the Vitruvian man.... 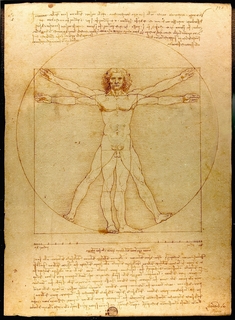 Leonardo da Vinci the famous painter, sculptor and inventor was also known for the large role he played in the development of knowledge about anatomy and the human body. In fact, even today, more than five hundred years after it was created, there is probably no more recognisable drawing of the human body than Leonardo's ‘Vitruvian Man.’

‘Vitruvian Man’ you will recognise as the drawing of a male placed within a circle who seems to have four arms and four legs. I recall being fascinated by it in high school when it was used as an image on the front of a school text book; however I didn’t really understand what it meant at the time. The drawing is supposed to represent the same man superimposed in two different positions not an octopus, that much I got, but not the deeper implications and meaning of what was behind the work. Like everything else with which Leonardo da Vinci was associated, this drawing has a mathematic basis to it. In it, Da Vinci was attempting to enforce a scientific method using mathematical laws onto the human anatomy. Da Vinci didn't just draw the man in the picture; he also kept notebooks that kept accurate measures of the proportions of all parts of the body, trying to discover a universal perfection of proportions. It was part of da Vinci’s apprenticeship with Andra del Verrocchio to study human anatomy. Da Vinci's teacher was insistent that all his students study it for a full understanding of how the human body worked. It was after he became a successful artist in his own right, that Leonardo took his interest a step further. At a hospital in , Leonardo began to study the body through dissecting corpses.
Da Vinci was a scientific genius as well as an artistic one. The study of the proportions of anatomy clearly helped with his perspective in painting and sculpture, but he also wanted to compile a book of his drawings and observations with the idea that it be used in the medical field. Medicine at the time was a backward science of ignorance and Leonardo had hoped that the discoveries of Renaissance would move beyond the arena of art to the arena of medicine

Leonardo Da Vinci's work in studying the proportions of the body were far ahead of his time, but set the stage for all study of the human body to come. There was, of course, no way to study the interior of the body before X-rays without opening up the bodies of corpses. Although it may have seemed disgusting to many, Leonardo's work stands as one of his greatest accomplishments. It is a testament to Leonard Da Vinci's work that his iconic drawing is so instantly recognisable around the world, even if people aren't necessarily aware of what it means or who drew it.