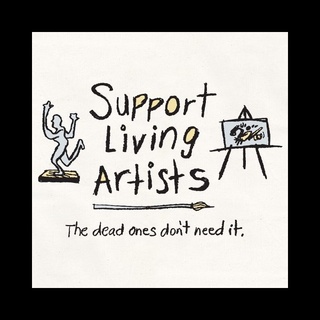 There are many quotes out there about art, my favourite being, “Support Living Artists, the dead ones don’t need it1” in that it is my goal to educate the world to invest in artists who are trying to make a living out of their art, help them survive and prosper and give them that chance to be the investment art of the future, who knows what would have happened if artists like van Gogh were given that chance while alive, what he could have done in those years we were robbed of when he died so young.

I want to share with you a few art quotes that I think are either nice, quirky, thought provoking or simply humorous. Feel free to add more if you have any you want to share.

An artist cannot fail; it is a success to be one.  ~Charles Horton Cooley

An artist cannot talk about his art any more than a plant can discuss horticulture.  ~Jean Cocteau, Newsweek, 16 May 1955

Surely nothing has to listen to so many stupid remarks as a painting in a museum.  ~Edmond & Jules de Goncourt

Creativity is allowing yourself to make mistakes.  Art is knowing which ones to keep.  ~Scott Adams

Painting is easy when you don't know how, but very difficult when you do.  ~Edgar Degas

I don't paint things.  I only paint the difference between things.  ~Henri Matisse

Artists can colour the sky red because they know it's blue.  Those of us who aren't artists must colour things the way they really are or people might think we're stupid.  ~Jules Feiffer

Painting is just another way of keeping a diary.  ~Pablo Picasso

Art is the only way to run away without leaving home.  ~Twyla Tharp

The aim of every artist is to arrest motion, which is life, by artificial means and hold it fixed so that a hundred years later, when a stranger looks at it, it moves again since it is life.  ~William Faulkner

Every artist dips his brush in his own soul, and paints his own nature into his pictures.  ~Henry Ward Beecher

Every child is an artist.  The problem is how to remain an artist once we grow up.  ~Pablo Picasso

Painting is silent poetry.  ~Plutarch, Moralia: How to Study Poetry

Painting is poetry that is seen rather than felt, and poetry is painting that is felt rather than seen.  ~Leonardo da Vinci

As far as I am concerned, a painting speaks for itself.  What is the use of giving explanations, when all is said and done?  A painter has only one language.  ~Pablo Picasso

Every portrait that is painted with feeling is a portrait of the artist, not of the sitter.  ~Oscar Wilde

To send light into the darkness of men's hearts - such is the duty of the artist.  ~Schumann

We all know that Art is not truth.  Art is a lie that makes us realize truth, at least the truth that is given us to understand.  The artist must know the manner whereby to convince others of the truthfulness of his lies.  ~Pablo Picasso

The artist's world is limitless.  It can be found anywhere, far from where he lives or a few feet away.  It is always on his doorstep.  ~Paul Strand

It is a mistake for a sculptor or a painter to speak or write very often about his job.  It releases tension needed for his work.  ~Henry Moore

Art is collaboration between God and the artist, and the less the artist does the better.  ~André Gide

Very few people possess true artistic ability.  It is therefore both unseemly and unproductive to irritate the situation by making an effort.  If you have a burning, restless urge to write or paint, simply eat something sweet and the feeling will pass.  ~Fran Lebowitz

When my daughter was about seven years old; she asked me one day what I did at work.  I told her I worked at the college - that my job was to teach people how to draw.  She stared at me, incredulous, and said, "You mean they forget?"  ~Howard Ikemoto

No great artist ever sees things as they really are.  If he did, he would cease to be an artist.  ~Oscar Wilde

Man will begin to recover the moment he takes art as seriously as physics, chemistry or money.  ~Ernst Levy

Let me ask you something, what is not art?  ~Author Unknown

An artist is someone who produces things that people don't need to have but that he - for some reason - thinks it would be a good idea to give them.  ~Andy Warhol

God and other artists are always a little obscure.  ~Oscar Wilde

For me, painting is a way to forget life.  It is a cry in the night, a strangled laugh.  ~Georges Rouault

Everything in creation has its appointed painter or poet and remains in bondage like the princess in the fairy tale 'til its appropriate liberator comes to set it free.  ~Ralph Waldo Emerson

Art is... a question mark in the minds of those who want to know what's happening.  ~Aaron Howard

I found I could say things with colour and shapes that I couldn't say any other way - things I had no words for.  ~Georgia O'Keeffe

The world today doesn't make sense, so why should I paint pictures that do?  ~Pablo Picasso


When painting, an artist must take care not to trap his soul in the canvas.  ~Terri Guillemets

If Michelangelo had been straight; the Sistine Chapel would have been wallpapered.  ~Robin Tyler

Art is the triumph over chaos.  ~John Cheever

Art is indeed not the bread but the wine of life.  ~Jean Paul Richter

One of the best things about paintings is their silence - which prompts reflection and random reverie.  ~Mark Stevens

An artist is a dreamer consenting to dream of the actual world.  ~George Santayana

What garlic is to salad, insanity is to art.  ~Augustus Saint-Gaudens

As the sun colours flowers, so does art colour life.  ~John Lubbock

What was any art but a mould in which to imprison for a moment the shining elusive element which is life itself - life hurrying past us and running away, too strong to stop, too sweet to lose.  ~Willa Cather

Art is like a border of flowers along the course of civilization.  ~Lincoln Steffens

Art is not a thing; it is a way.  ~Elbert Hubbard

The true painter strives to paint what can only be seen through his world.  ~André Malraux

Artistic growth is, more than it is anything else, a refining of the sense of truthfulness.  The stupid believe that to be truthful is easy; only the artist, the great artist, knows how difficult it is.  ~Willa Cather, the Song of the Lark, 1915

A man paints with his brains and not with his hands.  ~Michelangelo

A subject that is beautiful in itself gives no suggestion to the artist.  It lacks imperfection.  ~Oscar Wilde

An artist never really finishes his work; he merely abandons it.  ~Paul Valéry

The artist does not see things as they are, but as he is.  ~Alfred Tonnelle

An artist's instinct is more refined than the typical mortal's.  ~Holden Rinehart


An artist must be careful not to throw his ideas out with the trash.  ~Terri Guillemets

A great artist is always before his time or behind it.  ~George Moore

A man and his art are like a fool and his king.  ~Corri Alius

While I recognise the necessity for a basis of observed reality... true art lies in a reality that is felt.  ~Odilon Redon


The aim of art is to represent not the outward appearance of things, but their inward significance.  ~Aristotle

Art is when you hear a knocking from your soul - and you answer.  ~Terri Guillemets

A portrait has one advantage over its original:  it is unconscious; and you may therefore admire without insulting it.  I have seen portraits which have more.  ~Augustus William Hare and Julius Charles Hare, Guesses at Truth, by Two Brothers, 1827

Without art, the crudeness of reality would make the world unbearable.  ~George Bernard Shaw

Lying in bed would be an altogether perfect and supreme experience if only one had a colored pencil long enough to draw on the ceiling.  ~G.K. Chesterton

Listen carefully to first criticisms made of your work.  Note just what it is about your work that critics don't like - then cultivate it.  That's the only part of your work that's individual and worth keeping.  ~Jean Cocteau.