What is Symbolism in Art 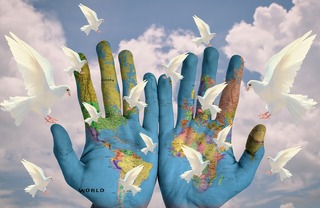 Symbols have always played an important role in art from the very earliest of times. They often represent an idea or quality, for example blackbirds are a symbol of death or dying, an egg stands for fertility, a white rose symbolizes virginity and purity and fruit is often used as a symbol of sexual pleasures.

Artists often have hidden meanings within their work and sometimes try to get a message across in their work using symbols as works of art don't usually include words, symbols have to be used in order to tell the viewer that message or sometimes even a whole story can be portrayed. When most of us look at a painting, we probably miss most of its meaning. This is especially true today, as we are not always aware of symbols which were understood more so in the past.

Symbolism itself actually originated in , and was part of a 19th-century movement in which art became infused with mysticism. The term Symbolism means the systematic use of symbols or pictorial conventions to express an allegorical meaning. Symbolism was and still is an important element of most religious arts. The style of Symbolism was not just in visual art it also was considered part of poetry and other literacy arts. The label ‘symbolist’ itself comes from the critic Jean Moréas, who came up with it in order to distinguish the symbolists from the related decadent movement in literature and art. Symbolism in art actually represents an outgrowth of the darker, gothic side of Romanticism. Symbolism in literature is distinct from symbolism in art although the two often overlap on a number of points. In painting, symbolism was a continuation of some mystical tendencies in the Romantic tradition; artists who worked in expressionism and surrealism commonly use symbolism to get their message across however they didn’t call their work symbolism as such. Aestheticism was probably closer to Symbolism than those two movements however.

Some Symbolist painters and visual artists were, Rene Magritte, Gustav Klimt , Henri Fantin-Latour, Edvard Munch, and Jan Toorop, as well as Frida Kahlo in Mexico, Elihu Vedder, Remedios Varo, Morris Graves and David Chetlahe Paladin in the United States. A sculptor who is considered to be a symbolist is Auguste Rodin, you can check out hhis profile here http://www.cantorfoundation.org/Rodin/rbioe.html

The symbolist painters utilised mythology and dream imagery and created a visual language of the soul, seeking evocative paintings that brought to mind a static world of silence. The symbols used in symbolism are not the usual emblems of mainstream icons we are normally used to (Think the yellow arches for McDonalds for example!) but intensely personal, private, obscure and ambiguous references. More a philosophy than an actual style of art, symbolism in painting influenced the contemporary Art Nouveau movement as well as Les Nabis. In their exploration of dreamlike subjects, symbolist painters are found across centuries and cultures, as they are still today.