5 ways to choose the best titles for your paintings? 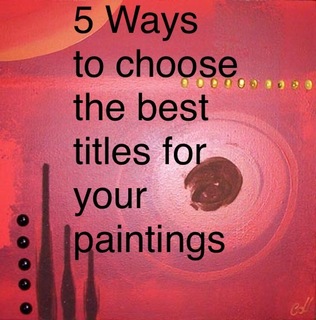 Choosing a name for your artwork isn't that easy, is it? If you asked me how I come up with names for my artwork I would be the first to put up my hand. I would also admit that sometimes I have no idea where to start myself.

Usually I will create the painting first and the title will follow but sometimes a really juicy idea for a title precedes the artwork so go with it if it works for you, you can change it when the painting is finished. Just as it does in music or movie making, a title can just pop up out of nowhere and then suddenly seem so inappropriate at the end, you end up having to rethink it anyway.

The right title is really important and can make a difference as to how a work is perceived and understood. Choosing the right title for an artwork can make the difference between a person purchasing the artwork or not. I have seen works of mine that are understood much better when the viewer reads the title (Humorous ones get big kudos!) and it being the reason they have connected iwth and brought the painting, so don’t discount that option.

Choosing the right title for an artwork can make the difference between someone purchasing it or not. In my experience over the years both as an exhibiting artist and gallery curator, I have seen works of mine along with other artists that end up being understood much better when the viewer reads the title (Humorous ones get big kudos!) and I was surprised how often this became the selling point and reason they connected with and brought a painting.

Let’s delve a little deeper into this idea. There are several different types of things that make up an artwork title. They are –

Sentimental names are about the reasoning behind your work and its importance to you as the artist. I have lost count of the times I have been asked why I painted something, what was the story behind it and how symbolic it was to me in my life.

Yes a lot of work can represent what was going on at the time. And if an appropriate name comes up that covers that why not use it right? However it can be a double edged sword in that you can often leave yourself wide open to critique on both your life as well as your art.

Try to avoid subjects that cause too much controversy (unless of course thats exactly what you want!) as the fallout can be much greater than the value you were expecting.

I was talked out of doing a series based on religion which at the time seemed right. I am pleased I was advised to do so. This is because not long after the Virgin in a Condom controversy happened and I don’t think it helped that artist's career all that much. 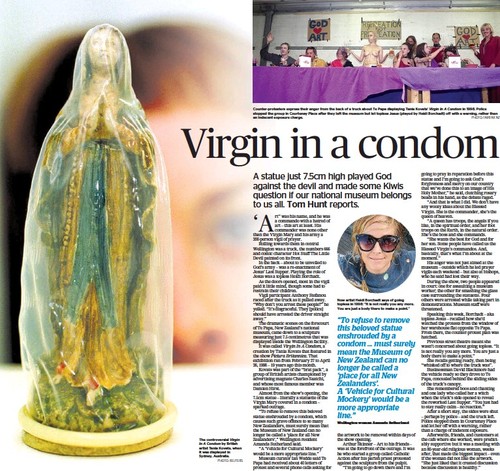 Numerical names can be helpful if you are creating a series however they can be boring and in my mind a tad unoriginal.

Naming a collection of works the same with a series number like Apples I, Apples II, Apples III for example does help if they are really similar; it makes it easier if the works are a series that don’t have much in the way to differentiate them. And it can be particularly appropriate if they’re prints and you do a run of them, so they will need to be numbered in that case.

Lets delve into factual aspects of artwork titles now. It's entirely appropriate to literally title a painting what the artwork is of, for example ‘Apple’ for a painting of an Apple is fine if that’s the way you want to do it. The only issue I find with this is that the more ordinary a name unless the artwork itself is abstract it doesn’t provoke as much stimulation and desire in the viewer and is likely to attract less of a chance of a sale generally.

When I talk about Abstraction naming, I don’t mean only with abstract work; it can in fact apply to any artwork that requires a bit of cynicism or pointing out the obvious. For example calling the apple painting ‘Banana’ we all know its not a banana but you as the artist would have some reasoning behind it. This is because it wouldn't be what the title depicts. This can be an interesting way to name an artwork and a creative brainstorming session for such titles can be fun as well.

Mysterious speaks for itself or does it? A mysterious name could be intended to make the viewer think. Is the message about what the artwork depicts or what the artist wants them to think?

An example for the apple painting could simply be titled "Alone", which has more to do with the apple being singular, or we could delve much deeper than that and depict all sorts of reasoning. My artwork called 'Not a Still Life with Red Apples' leaves more questions than it answers.

Abstract art in itself can be challenging to title, or on the other side of the coin, extremely easy. I’ve seen works titled ‘Red' where the colour red was used in its creation. Because it isn’t obvious what it is, the colour used makes it easy to name it.

If it's messy and violent, it could be ‘Red Storm’ or a serene abstract could be ‘Red Lake'. Therefore, choosing the appropriate verb, noun or adjective to set the scene is critical.

I suggest it’s a wise idea to be a bit more cryptic though and have a go at titling your abstract work with more adventurous titles. You would have had some idea in mind when you were creating the work so let the title reflect that.

Leaving the viewer to make up their own mind on what it depicts can be just as good as well. During a show I curated, I asked the artists to elaborate on their work. Some of the pieces were dark and contained suicidal thoughts, though it wasn't immediately evident until he described them. I chose to omit these details when selling the work as I felt it would have affected his sales and wasn't necessary. The customers who did purchase left with their own happy versions of what they saw in the paintings and their own connection. This can be more relevant at the end of the day.

Another example of what I think doesn’t help art sales is to not state the obvious e.g. ‘Blue circle with red dot,’ when it is literally that! These titles can be so boring and leave little room for imagination for viewers and potential buyers.

What happens if you can’t come up with a title? Should you leave it ‘untitled’? 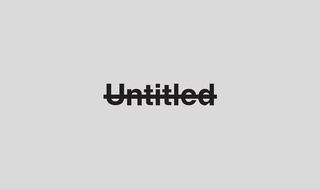 Should you use the title UNTITLED

From my time as a curator I offer you the advice to not leave their artwork untitled. It can leave the impression with the buyer that the artist didn’t care enough to give that artwork a name and can leave them feeling cold.  A little time taken to finish what you started can make all the difference in selling your work. You can use titles like ‘untitled landscape’ or ‘untitled artwork without a home’ if you want to clever with your marketing, it can come back and bite you in the arse if people think you’re being pretentious so beware of that.

For my art career I created somewhere in the vicinity of 1400– 1500 artworks so I have had to come up with a huge amount of titles. A method I use when I’m really stuck is word association.

This website www.thesaurus.com is an online thesaurus where you can type in a word like ‘Fire’ and it comes up with alternate words such as blaze, bonfire, charring, coals, combustion, conflagration, embers, flame and smoke, flames, flare, hearth, incandescence, inferno, luminosity, phlogiston, pyre, scintillation and much more.

Choosing any one of those can give you something to build on and hey presto a title for your artwork, like “Incandescent Pyre’ could be an option for such a work.

A while back I was working on a series of cats and was looking at the feeling that I imagined each cat' to have. An example of one of my cats is shown here. I felt he looked quite nonchalant so therefore 'Nonchalance seemed appropriate. Image below 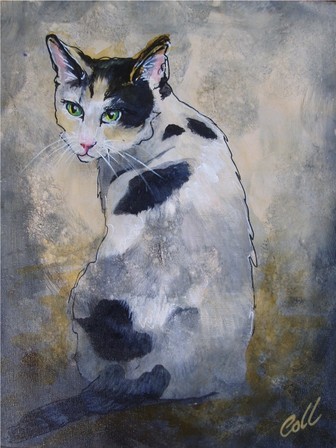 A lot of other artists will advise you to –

My point here is rules are made to broken. If it works do it. We can advise you until the cows come home but at the end of the day go with your gut instinct, its usually right.

If you found this article helpful please consider a small donation by visiting my kofi.com page

(It literally is just the price of a cup of coffee)

Tags: how do you choose a name for a painting  how to name artwork