Art has always been in my blood and when asked to explain why I do it, I can only explain it as being similar to the ‘need’ of all of us to breathe….artists ‘need’ to paint, they’re more relaxed and at ease if they have painted and Im no exception. On weeks where I don’t get to do any art I feel stressed and edgy, so I try to make sure I get some art in at some stage even if it’s an early rising or late night.

I recall as a very young child drawing on things I shouldn’t have drawn on, and painstakingly repainting the flowers on my bedroom wallpaper that were in a hand-painted style. I don’t know if my parents even knew I did this as I don’t recall getting a telling off for it!

In about my third year at primary school I had a rather interesting teacher who was flamboyant and loud; he seemed to like art a lot and got us kids to do all sorts of things much to my delight, as teachers prior to him were not so inclined.

One particular project he set for us was to paint an apple, simple enough, only it was set as a competition amongst us students and there was to be only one winner, no second prizes or awards for putting in effort (Like these days!)

You can imagine my horror when I didn’t win. I myself couldn’t see the difference between the winner’s apple and my apple paintings (Im sure there was but at the time I couldn’t see it!) and spent many hours painting new ones and asking the teacher if it was any good. His reply for each and every one was “It’s good, but not as good as Lisa’s one!” sending me into absolute despair. 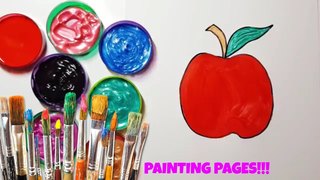 How to paint apples for kids

It took many years before I could paint an apple again, in fact literally only in the past two years did I attempt to paint an apple again. I had built up a phobia about it, thinking I couldn’t paint such things and feared doing apples ever again. Forget still life paintings of fruit bowls, I thought I simply could not paint them, so I didn’t bother trying again. That was until I was helping other artists overcome their obstacles, one of which was their belief that they couldn’t paint well, or were unable to be an artist because someone else told them they weren’t capable or had scorned their early attempts at art. How was I to teach them that their art and ability was of any value, or that they could paint, if I didn’t believe in myself either?

You don’t have to listen to others, you also don’t have to show them your work; that was my plan when I made my attempt at the apple art, Id hide it or burn it if I wasn’t happy with the outcome….well it turned out ok and to be honest it ended up being my favourite painting and its now part of my own collection, on proud display in my home, and best yet, I don’t care what anyone thinks of it, its mine, I love it, I appreciate it and I enjoyed creating it just for myself.

Art is something you can only improve at, the more you do it, the better you get.

Tags: how to paint apples  what are still life paintings